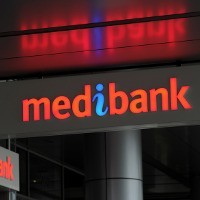 With the Australian sharemarket back pretty much where it started the year, investors are desperate for any wins they can get, and tomorrow’s Medibank float is now the subject of the frothiest speculation.

The business media is certainly helping to stir up enthusiasm with reports like this one touting a bidding frenzy and an “almost guaranteed increase in value on debut” for small investors.

The hype has only built with confirmation yesterday from Finance Minister Mathias Cormann that the sale was indeed heavily oversubscribed and had raised $5.7 billion — roughly $1 billion more than expected — with the price for institutional investors set at $2.15 a share, right near the top of the wide price range tipped early on of between $1.55 and $2.30.

Under the terms of the very cleverly structured offer, small investors will pay no more than $2 a share, so, as The Australian Financial Review wrote this morning, they “will be happy — they are already looking at a gain of 7 per cent as soon as Medibank stock starts trading, and will be dreaming of an even bigger stag profit on Tuesday, when the shares hit the boards”. (A stag profit is the money you make selling a share on its first day of trading on the stock exchange, when the shares open above the issue price.)

Medibank is likely to debut at $2.20, according to this report in The Australian, giving small investors a “rails run” — and here’s where things start to get silly.

For some punters, a 7% jump in the value of their Medibank allocation in one day is not exciting enough, and their minds turn to how the “almost guaranteed” return might be leveraged to make even more profit. It was astonishing to receive an email advertisement last week from the team at day trader chat site HotCopper promoting some fairly exotic financial products — contracts for difference (CFDs) — as a way of placing much bigger bets on Medibank.

The HotCopper ad was placed by IG Markets, which claims to be the biggest CFD provider, and clicks through to its website, which outlines four Medibank strategies: potentially lock in a profit before Medibank lists; trade Medibank before it lists; add to your Medibank share allocation; and sell your Medibank shares but also maintain a position for future possible upside.

The maths behind each strategy is quite complicated, but it boils down to this: CFDs are bets, pure and simple, on the price of Medibank shares on the ASX at a future point in time (say, the end of day one), and while they therefore give investors an exposure to the upside or downside in Medibank shares, the CFD holder does not have any ownership of the shares themselves. They can be leveraged up to 90%, so a $2000 bet can give the investor exposure to a notional holding of $20,000 worth of Medibank shares — enabling investors who sat on the sidelines or didn’t get as many shares as they wanted, for example, to skirt the float allocation policy.

CFDs are bought and sold in a secondary or “grey” market (i.e. they are not traded on the primary market, the ASX) operated by IG itself. The value of a given CFD will fluctuate wildly — imagine a 10x magnification of the movement of the Medibank share itself. This can work both for and against the investor, who may be left owning not only a worthless contract, but owing IG more money than he or she put up initially.

“CFDs are leveraged products. CFD trading may not be suitable for everyone and can result in losses that exceed your initial deposit, so please ensure that you fully understand the risks involved.”

Such speculation is ridiculous. Medibank, remember, is a mature business with a long-term growth story under stable management that is aiming to reduce costs — but not radically — and is being floated at a premium valuation representing some 23 times annual earnings. Medibank is not some dot-com like, say, Freelancer, all hype and possibility, whose shares have jumped from last year’s issue price of 50c each, to as high as $2.60 and are now back where they started, with chief Matt Barrie today pointing somewhat disingenuously to mistakes in the initial allocation policy.

The big floats over the last five years or so have been a mixed bag: Myer has been a dog from day one; Aurizon (formerly QR National) has been a boon; and Nine has traded down-up-down. The investment banks running these offers, and the financial institutions buying into them, have the price negotiations down to a fine art. While a Coalition government will want thousands of small investors in Medibank to do well out of the float (and let’s face it, they are more likely to be Liberal voters), they also want to maximise the return to the public coffers. For the small investor placing highly leveraged bets against the big insiders in the hope of a short-term gain surely is a mug’s game.