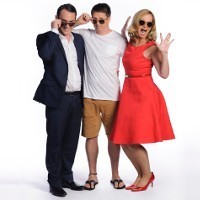 Byron Bay-based business Grown Eyewear is proof you can “run a global business from anywhere in Australia”, says one of its new high-profile investors.

Simson and McGrath each have a 20% stake in the company, with Simson telling SmartCompany this morning another 5% of the company has been set aside for an additional “high-profile investor” who the sharks will help convince to come on board in the near future.

Grown Eyewear products are made from sustainable woods, including bamboo, maple, ebony and zebrawood. Phillips is passionate about ensuring the wood he uses only comes from ethically managed forests and told the sharks he dropped a supplier in the past because they did not meet his standards.

Part of the proceeds from the sale of Grown glasses are then donated to help fund eye care services in third world countries, with Grown funding sight-restoring surgery for one person or diagnostic eye examinations for 12 children for each pair of glasses sold.

As an ambassador for Conscious Capitalism, Simson says she loved Phillips’ story and admired his “deep passion for doing good in your community”. She also appreciated that Phillips had designed and developed his product in regional Australia.

All these things made Simson believe she could “work with this person”.

Simson is already getting her hands dirty by helping Phillips with his online strategy and was relieved when the Grown Eyewear website didn’t crash under the weight of traffic from Shark Tank viewers last night.

“It was a real test,” laughs Simson.

Simson says she and Phillips have “rich and robust” discussions about what is working and what isn’t but at the end of the day, he is willing to listen to his new mentors and ask plenty of questions.

“What is wonderful is that he is all ears,” Simson says.

The ability to listen and take on advice is just as important as being able to pitch your business to the sharks, says Simson.

Simson compared Phillips to another entrepreneur who pitched his digital key system last night but was unable to answer the shark’s questions about his company’s finances and chose not to listen to what they had to say.

“The technology Steve has developed could be groundbreaking … but the difference is he did not bring us on a journey,” Simson says.

GROWN sunglasses are fragile at the hinges and have broken on me after 2 years. This occurred on 2 separate occasions. These were lightly used. I spoke with customer service. They are unable to replace.