Shark Tank: why Dean Salakas decided not to give up half of his company, The Party People 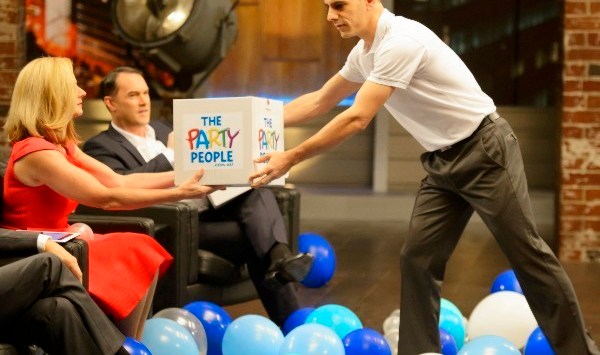 When Dean Salakas walked into the Shark Tank on Sunday night, he was hoping to score an investment from Boost Juice founder Janine Allis or Red Balloon founder Naomi Simson.

“From the beginning Janine was my first preference,” Salakas told SmartCompany.

The “Chief Party Dude” of party-supply business The Party People was seeking a $400,000 investment from one of the sharks for 5% of his business, which includes two retail stores in New South Wales and an online shop.

The Party People turns over $4.1 million.

While Steve Baxter, Andrew Banks, John McGrath and Naomi all bowed out of the negotiations, Allis was keen on the idea – as long as she could have 40% of the company instead.

Salakas says he had “room to move” and so he offered 10% to Allis, but, in the end, he says the pair was too far apart to come to a deal.

“I was negotiating with myself at that point … but I thought, I need to stand my ground,” Salakas said.

But Salakas has only positive things to say about his experience in the Shark Tank, which he says is already having flow-on effects for his business.

Despite “preparing the website as much as we thought suitable” before Sunday night’s episode, Salakas says The Party People website “exploded” with traffic on the night.

While this did not automatically translate into sales as the site struggled to stand up under the increased traffic, Salakas says two days later the company’s online sales are around double of what he would normally expect to be doing. There’s also been a “buzz” in the company’s two stores.

But perhaps more exciting, are the opportunities he has been offered with other businesses since appearing on Shark Tank, including interest from potential franchisees around the country.

Salakas says he would definitely consider franchising The Party People, which was originally founded by his mother and grandfather. He’s also following up some potential leads from financiers who may be interested in backing his plan to expand nationally.

He’s also chatting to two other entrepreneurs who missed out on investments from the sharks, with the three businesses planning to “team up” as a group of “Shark Tank victims”.

“We’re coming together and are going to use this as a bit of a follow-up,” he said.