There’s more to a great investment than proximity to the CBD: Terry Ryder 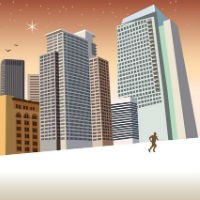 I imagine there will always be people who see the CBD as the beacon for all things real estate. They are the diehards who measure property in terms of its proximity to the tall office buildings.

It’s a cherished belief founded in myth and fantasy.

I’m frequently assaulted by emails from people who think you’re nowhere if you’re not within 10 kilometres of a CBD. They’re people who haven’t made the transition to the new century. Nor have they conducted any meaningful research.

There was a time when the CBDs were the centre of the universe because most of the jobs were there, a lot of the industry was there and most of the shops were there. It was important to live close to this hub of all things important.

Historically, industrial uses occupied riverside property in or near the city centre. Over time that has changed. These days, businesses with industrial premises and warehousing needs don’t want to be in the central city. They want to be close to major transport routes and on less expensive land, which means industrial businesses and their jobs have migrated progressively to the outer suburbs.

Also historically, the major shopping precincts were central city. That was before the creation of regional shopping centres. These days, no one goes into the CBD to do their shopping. The only people who shop in the city centre are those who work or live there.

That leaves office property as the cornerstone of CBD relevance. But that is being eroded gradually as well. Office precincts have sprouted in the middle and outer ring suburbs, providing cheaper office space for businesses that don’t really need to be in the city centre.

In modern Australia, CBDs are no longer the hubs of all things important. Increasingly, the economic centre of our major cities is shifting away the CBDs. Increasingly, the big employment nodes are a long way from the city centre.

Being close to the CBD is no longer a proper benchmark for the worth of a piece of real estate. Today, these are many factors more important than the CBD in terms of what you need to be near to have intrinsic value.

They include infrastructure, such as transport links, medical services and education facilities. They also include jobs nodes.

Key suburban commercial centres like North Sydney, Macquarie Park, Parramatta, Homebush, Mascot and Chatswood collectively also contribute around 20% of the Sydney economy. There’s another 60% running around out there in the suburbs of the Sydney metropolitan area.

The report suggested the economic centre of gravity has been moving north-west from the CBD for more than a decade, thanks to the commercial hubs that have developed at Macquarie Park, Sydney Olympic Park, Parramatta and other suburban locations.

It also suggested that Melbourne’s economic centre of gravity is now 6.7 kilometres south-east of the city’s CBD.

The report suggests that one of the outcomes of the rising influence of alternative business centres in Sydney is the need for better transport connections between them.

Commercial centres and jobs nodes have moved further and further from the traditional CBDs. The locations that have those precincts, as well as good transport links, strong infrastructure and affordable real estate, are the places that attract the lion’s share of demand from real estate buyers.

That mass demand is driving house prices. As I wrote in this column on Tuesday, research from DSRdata.com.au shows that growth in the outer-ring suburbs of Sydney has exceeded that in the inner-ring over the past three years.