What The Block’s results mean for the property market 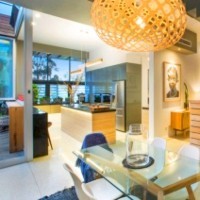 Tasmanian brothers Simon and Shannon Vos took out the $100,000 prize at the auctions of The Block Glasshouse.

All five of the apartments at The Block sold at auction, though they didn’t approach the bullish results at the Albert Park warehouse in The Block Fans v Faves earlier this year.

Rookies Chris and Jenna, who had the largest floor space of any of the six apartments, came in second place with a $1.81 million price.

Yet again, it seemed that the auction order played a role in the final results. This time, the highest priced apartment went under the hammer second, Chris and Jenna’s was auctioned first, and sales price dwindled from there.

Michael and Carlene chose to go last. Deanne and Darren, who had second choice, did went as late as they could, choosing to go to auction fourth.

Simon and Shannon nominated to go second, while Max and Karstan decided to go third. Chris and Jenna were stuck with first place after the other couples determined their order.

The contestants had no doubt hoped to repeat the formula established on The Block Fans v Faves, where the hammer prices escalated with each auction as buyer desperation took hold.

But in a lesser location, with lesser properties and fewer interested buyers, they instead saw the buyer pool dilute as each apartment sold.

The discounts received by the contestants after completing the sixth “secret” apartment did indeed impact the final result.

Maxine and Karstan had the biggest reserve price due to the size and aspect of their apartment, had an initial reserve of $1.7 million. Their winnings earned them a $1.67 million adjusted reserve.

Michael and Carlene’s reserve was discounted by $20,000, giving them a final reserve of $1.38 million.

Chris and Jenna did not get placed in the top three at either stage of the challenge, and so missed out on a discount, and had a $1.5 million reserve.

The proceedings began with Chris and Jenna’s auction overseen by Anton Wongtrakun of Dingle Partners, which saw three bidders initially compete for the windowless unit. After bidding seemed to snag at the $1.5 million reserve mark, a fourth bidder entered the race, restarting the momentum.

Two bidders battled it out from $1.5 million upwards: what appeared to be a young couple and the other a rather emotive buyer’s agent, pushed the price to up to $1.81 million, with the apartment going to the client of the agent.

When Simon and Shannon’s apartment went on the block, host Scott Cam announced that Block regular  Damien Cooley was a “very good auctioneer, this bloke”. After just two bids, from Frank Valentic and another buyer’s agent who bid at The Block Fans v Faves auctions, the home was up for $1.7 million.

The young couple who bid on Chris and Jenna’s apartment popped up again, pushing the price up further, before a profusely sweating Valentic placed a $1.9 million bid, securing the apartment.

The subsequent auctions proceeded at a markedly slower pace.

Not quite the wedding gift the disappointed Max and Karstan were expecting. Nor were many other punters, with judge Shaynna Blaze predicting their apartment would sell for the highest price.

A deflated Deanne and Darren were up next, with their apartment going under the hammer with Russell Cambridge of Biggin & Scott. It seemed that Dee’s provincial luxury stylings, which were feared would alienate some buyers, at least brought in some interest from bidders who had not appeared at the previous auctions.

However, things stagnated just after they passed their reserve, with a number of $10,000 bids put the price of their apartment at $1.38 million. The couple ended up with just a $10,000 profit after three months of work. Had they not received their reserve discount prizes, their apartment would have been passed in below reserve.

Michael and Carlene’s apartment was auctioned last. The auction, said to have stretched out for an excruciating 45 minutes, saw Matt White of Ray White try to squeeze interest out of the rather small buyer base. Bidding opened at $1.2 million.

A few bidders who had not yet appeared at the previous apartments popped up, but it wasn’t much use to Michael and Carlene. Things stalled below reserve at $1.36 million for some time.

Some whispers were exchanged among potential buyers at the $1.36 million mark while White and his fellow agents consulted with Michael and Carlene.

They agreed that the apartment should be passed in should it just reach reserve, as a reserve price sale would result in zero profits for Michael and Carlene.

White returned to let the couple know that a bidder was willing to put in a $1.39 million bid, which White would be forced to accept in accordance with Victorian laws. And so the bidder purchased at $1.39 million.

All in all, the disappointing Block Glasshouse results reflected the market’s interest in a bizarre office conversion located on an inner city main street.