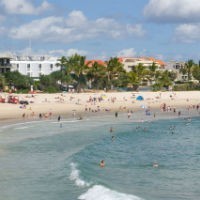 One of the enduring myths of real estate is that iconic tourism markets are great places to buy real estate.

The Australian, which consistently provides real estate coverage awash with misinformation, this week added to the pile of misconceptions by publishing a glowing eulogy to the property market in Noosa, which I regard as Australia real estate’s biggest lemon.

Noosa Heads has been a dreadful performer on capital growth and still has pricing levels well below those of 10 years ago.

At the same time, I’ve had some inquiries from people thinking of buying in another of Australia’s iconic duds, Byron Bay.

Noosa and Byron Bay have a problem in common. They both have economies based on tourism and retirement, which are fragile and volatile factors not helpful to real estate markets. Locations like these seldom deliver good price growth.

This is a problem for seaside communities along the east coast of Australia. When you add unit oversupply to the mix (a la the Gold Coast), you have a recipe for real estate under-achievement.

It’s only when tourism economies diversify through infrastructure spending and active encouragement of new industries, that their real estate markets start to perform. Current examples of tourism economies undergoing evolution are Cairns, Port Macquarie and the Sunshine Coast. These are all transition economies which are now producing strong property markets with prices rising strongly.

But isn’t Noosa on the Sunshine Coast, I hear you ask. It is, but it’s a long way from the action that is turning things around for this region.

The game-changing activity for the Sunshine Coast – such as the $2 billion hospital and all the medical-related projects springing up around it – is all happening in the central and southern portions of the region. Noosa languishes on the far northern fringe of the Sunshine Coast and essentially remains what it has always been – a stuttering struggling tourism and retirement enclave, with an under-performing real estate market.

The long-term capital growth rate for Noosa Heads apartments is -2.8%. That means that, over the past decade, the median unit price has dropped by an average of 2.8% per year. And that means pricing levels today are well below those of 2005. I can’t find a significant real estate market anywhere in Australia with a worse record.

For Noosa Heads houses, the long-term growth average is -0.2% per year. That’s not as bad as units, but it does mean that pricing levels are still lower than they were 10 years ago.

None of that was mentioned in the article in The Australian, which claimed that Noosa Heads prices are “set to go north”. Why did they think so? Because a line-up of Noosa real estate agents said so. The article read like a press release commissioned by the agents with a strong vested interest. This is what passes for journalism in the country’s national newspaper.

Noosa Heads and Byron Bay have another problem in common, other than their brittle tourism economies: they both have beaches that tend to vanish on a regular basis. Byron’s image has been damaged in recent years by ongoing coastal erosion events which have threatened the existence of seaside homes and forced governments into controversial and expensive solutions.

In the Byron Bay market at the moment, it takes on average seven months to sell a house and 10 months to sell an apartment – and then only if you’re willing to discount your asking price 9-10%.

The long-term capital growth average for Byron Bay houses is a tad above 2% per year. In real terms, property is worth less than it was 10 years ago.

Somehow, locations like Byron and Noosa continue to command a special place in the minds of people who see them as wonderful places to invest. Trust me, they’re not.