“He’s the mum and I’m the dad”: Pepperstone duo named Australian EY Entrepreneurs of the Year 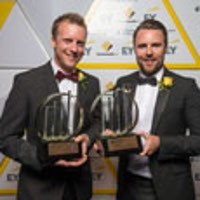 Successful entrepreneurs need “someone to drag you up over the top of the trenches when things get tough,” says Owen Kerr, who is one half of the duo behind Australian online foreign exchange trader Pepperstone.

Kerr and business partner Joe Davenport were crowned the Australian EY Entrepreneurs of the Year at a ceremony in Melbourne last night. The pair also won the services category of the national awards, having won the same category at the Southern Region awards in July.

Kerr and Davenport founded Pepperstone in 2010 and the online trading platform now services more than 20,000 retail investors in more than 150 countries. Pepperstone employs 35 employees in its Melbourne, Dallas and Shaghai offices.

Accepting the services category award, Kerr and Davenport joked on stage that their business partnership is “like a marriage”.

But speaking to SmartCompany after the event, Kerr put the jokes aside.

“I don’t think we each could have done this by ourselves,” he says. “We play to each other’s strengths, we both have areas we do well in [and] we definitely share the responsibilities.”

“We’ve been together for a very long time, almost as long as me and my partner,” Davenport says.

“The idea is you go through highs and lows, you go through tough times and good times but it’s really about focussing and concentrating on the business.”

In just four years Pepperstone has grown to become the 12th largest forex trader in the world in terms of transactional volume and Kerr says the company is currently turning over more than $70 billion worth of transactions a month.

And while the business has not escaped controversy, having been hit with a $900,000 unfair dismissal claim in August in the fallout from the Australian Bureau of Statistics and NAB insider trading scandal, both Kerr and Davenport were “flabbergasted” to be recognised by EY.

“It’s been a hard slog but this is the pinnacle of the mountain,” Kerr says.

When asked about his advice to budding entrepreneurs, Kerr says “perseverance is key”.

It’s a quality the pair has in spades, admitting there was “lots of tuna and beans” eaten in the early days of Pepperstone.

“It was a lot of hard work, a lot of time spent coding, but eventually we started getting clients and it snowballed,” says Kerr, who believes entrepreneurs should “fail fast”.

“If an idea doesn’t work in a short amount of time, don’t be afraid to kill it and move onto the next one,” he says.

“Don’t be afraid of mistakes,” he says. “We’ve made so many mistakes along the way, including some big ones, but you’ve just got to keep going … you’ve got to risk it.”

Kerr and Davenport will travel to Monte Carlo next year to compete in the 2015 EY World Entrepreneur of the Year awards, following the footsteps of last year’s national winner, Seek founder Andrew Bassett.

Other winners at last night’s awards were Sam Chandler, of Nitro Software, who was named emerging entrepreneur; Peter Freedman of RØDE Microphones, who won the industry category; Jon Stewart of Aurora Oil and Gas, who won the listed company category; Chris Dance and Matt Doran, who were named technology entrepreneurs; and Jean Madden, who won the social enterprise category for her business, Street Swags.