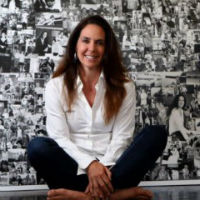 Entrepreneur, author and now TV star Janine Allis will join Women’s Agenda for breakfast next week. Below’s an extract from Angela Priestley’s 2014 book, in which the Boost Juice founder explains how chance encounters — including spending time with David Bowie, Robin Williams, Charles Saatchi and others – helped build her confidence and led to big opportunities.

Tickets to next week’s breakfast sponsored by Citibank are still available here.

Janine Allis is a self-described “girl from the burbs who had no idea about business.” She never went to university, never finished school and never had too many career ambitions as a teenager.

The founder of Boost Juice, a chain of more than 250 stores in 11 countries, the much-celebrated entrepreneur has built her career off the chance encounters that have come her way — celebrities, businesspeople and meeting her husband Jeff Allis. These chance encounters have sparked significant turning points providing a colourful mix of jobs to decorate her CV: yacht stewardess, advertising account manager, model, nanny, cinema manager, publicist, business owner.

Having met everyone from David Bowie to Charles Saatchi and the late Patrick Swayze, she’s sought to make the most of both the fleeting and long-term relationships chance encounters present, to accept immediate offers of help, and keep those who offer a favour in mind.

Janine’s tenacity to meet and exploit chance encounters has helped her career in ways a formal education couldn’t. A lack of experience or qualifications never bothered Janine, nor stopped her from chasing a job she wanted or getting in front of the people who could make it happen. She demonstrated what she could do, rather than waiting on a qualification to validate what she might be able to do, and accepted offers of help when they came up. “Had I been a publicist before? No. A cinema manager? No. A stewardess on a yacht? No. But you work it out as you go. I don’t have the experience, but I’m a quick learner and I think commonsense is very much underrated,” she says.

Janine grew up in a rural area just outside of Melbourne. As a school student, she says she was “cheeky, never rude”, with “more confidence than I deserved to have.” She was even, perhaps, a bit of a disappointment to her teachers who had seen her older sisters go through the school and expected a similarly diligent student in Janine.

But diligence at school wasn’t for Janine, who much preferred sharing conversations with others and meeting as many people as possible. She left before getting her leaving certificate and at 17 started work as a junior media assistant with advertising agency McCann Erickson, later supplementing her income by working as a model and taking a job in a nightclub in order to save enough money to get overseas.

Her travel plans were similar to those of any young and adventurous backpacker type — she had no plans. She followed her nose from one backpacker job to another: camp coordinator in the United States, nanny in France and eventually a stewardess on a yacht. It was the last-mentioned that produced the most significant chance encounters — not hard when the cost to hire the yacht was so high that it attracted passengers who were wealthy, powerful and often famous.

Read more: Shark Tank judge Janine Allis: the key to success in business and life is how you think

“It took away the illusion of what the rich are like,” Janine says on meeting such people. “There were gorgeous, beautiful people who were rich, and there were also as many arseholes who were rich. You’d have someone like David Bowie, standing there saying, ‘Janine, I’m nervous, I have all these famous actors coming on board,’ and you’d think, ‘Mate, you’re a rock star, you have nothing to worry about!’ Just because they can afford to holiday on a nice boat for a week doesn’t mean they exist in this other world. People are people.”

Chance encounters with the rich and famous provided Janine with an excellent grounding for getting past all forms of intimidation when meeting new people: a great help for approaching investors and those who could assist her career later on.

But it was an encounter on the yacht she was working on with one particular individual who would enable a major turning point — one that would set her career on a new course once she eventually returned home to Australia, well on the path to launching a major business of her own.

One week film producer and then chairman and CEO of Columbia Pictures David Puttnam boarded the yacht in the Caribbean. He and Janine hit it off on the boat, so much so that he told her that when she got back to Melbourne he could try and get her a job with Village Roadshow where he served on the board. A few years later, Janine tested his word, and consequently got a job managing a cinema.

After a stint running that cinema in Melbourne, Janine was sent to Singapore to help develop Village in Asia. While there, she networked her way to the next opportunity — meeting a couple of guys from United International Pictures at a launch who provided the link to her next job — as a publicist back home in Australia, carting around the studio’s key talent to promote some of the biggest movies of the time including Babe and Star Trek. Again, she had no experience in publicity. It was a matter of backing what  she could potentially do and knowing you simply have to start somewhere, so why not dive straight in?

Janine met her husband while on that job — he worked in radio, and she was attempting to get the latest talent some air time. They married in their twenties, had two kids by the time Janine was 32 (another two came later) and eventually both decided they’d had enough of working for someone else and would launch their own business.

They needed a big idea and it finally came while holidaying in the United States, a turning point where Janine realised just how big the juice and smoothie market already was on the other side of the world and the potential to be the first to go big with such a product in Australia. With no former business, retail or food experience she used her connections to launch her ambitious plan for a chain of juice stores. She sketched what the stores would look like and how she could have storage, freezers, blenders, counters and staff fit into a small space that could keep rent down. “The Boost brand started from nothing. I opened a word document and started typing — that was the business plan.” She knew the concept would start with a single store and quickly increase to multiple stores. If they were going to dominate the juice market as planned, they would need to go big as quickly as possible. Within two years of opening their first store in Adelaide, Boost was named the fastest growing chain in the country.

Janine has achieved success her own way, improvising her career according to the chance encounters that have come up and her ability to make the most of the significant turning points those individuals can offer. She knows the power in a relationship, and how a simple conversation can lead to career opportunities she may never have previously considered.

Fifteen years after launching, Boost has grown to a franchising model of hundreds of stores in 14 countries. It happened with hard work, but one wonders where Janine would be if she hadn’t have made the most of all the chance encounters she’s come across, particularly that one on a yacht all those years ago.