“If that tool would just get outta the way! Loser”: Child’s comment in go-kart ad draws ad watchdog’s attention 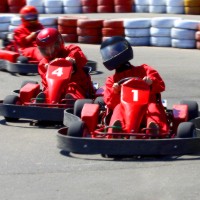 A complaint against a radio ad featuring a child who says the words “tool” and “loser” to promote a Queensland go-kart company has been upheld by the Advertising Standards Bureau.

The ad by Kingston Park Raceway features a young boy commenting on the slow driving skills of the person driving the car he is a passenger in, with the final comment: “If that tool would just get outta the way! Loser.”

A voiceover then goes on to say: “These holidays shut the little ba…ack seat drivers up”.

The advertisement drew a complaint from a parent who said their two children had heard the material on the radio and then mimicked the tone.

“I find this advertisement offensive as, to me, it depicts that it is normal and acceptable for children to behave in a rude and offensive manner to their parents, or adults that are driving them around,” said the complainant.

“Use of the words ‘loser’ and ‘tool’ and reference by the father children being bastards. Completely inappropriate language used by the child in the ad, disrespectful and a poor role model for children.”

Kingston Park Raceway responded to the complaint by saying it had agreed to make some minor changes to the ad, including taking out the words “tool” and “loser”, after the ASB had emailed to the radio station.

“It is not our intention to offend or insult anyone and this was just an ad that took the micky out of screaming kids in the back seat during school holidays,” said the company.

But the ad watchdog upheld the complaint against the original ad, saying although these terms were not of themselves strong or obscene words, the community takes a different view on language when it is spoken by a child rather than an adult.

“The majority of the board considered that the use of the words, “tool” and “loser” in the context of an abusive delivery by a child to another person amounts to language that is inappropriate in the circumstances,” said the ASB.

Branding expert Michelle Gamble, owner of Marketing Angels, told SmartCompany while the ad certainly wasn’t as offensive as some other advertising material, it was definitely “cringe-worthy”.

“It doesn’t sit well, that type of language being spoken by children,” says Gamble.

“It’s not something we want to expose our kids to.”

Gamble says there is certainly a trend of parents complaining about material seen by their children, especially since the success of the campaign against Wicked Campers.

She says the lesson for business is to always test your advertising material.

“The message is run it past people,” says Gamble. “The big brands do it.”

Gamble says many businesses believe testing is a long and costly process, but business would benefit from even getting a second opinion from friends or family.

“It’s not worth negative publicity or the cost of changing the ad,” she says.

SmartCompany contacted Kingston Park Raceway but did not receive a response prior to publication.