Revealed: The top industries most at risk of insolvency

Australian small businesses are recovering from the economic fallout of the COVID-19 crisis but some industries are lagging well behind others.

Businesses in the hospitality, entertainment and education industries are experiencing the highest risk of insolvency, according to CreditorWatch’s monthly Business Risk Index.

Released today, the index shows that the likelihood of businesses defaulting on payments in October stands at 5.78%, just 0.01% up from September. Defaults are a key sign of the potential for a business to collapse.

But the probability of businesses in the food and beverage industry of defaulting is above the national average at 5.97%.

Arts and recreation services rank the second worst industry at 4.03%, followed by education and training at 3.99%.

James O’Donnell, the index’s chief data analyst and director of Open Analytics, says food and beverage businesses scored the worst, with hospitality businesses in the Gold Coast most at risk of insolvency.

“Obviously, the hospitality industry has deteriorated as you might expect lately,” O’Donnell tells SmartCompany.

“The Gold Coast is the worst region in the country because it’s an area with an economy driven by hospitality and tourism.” 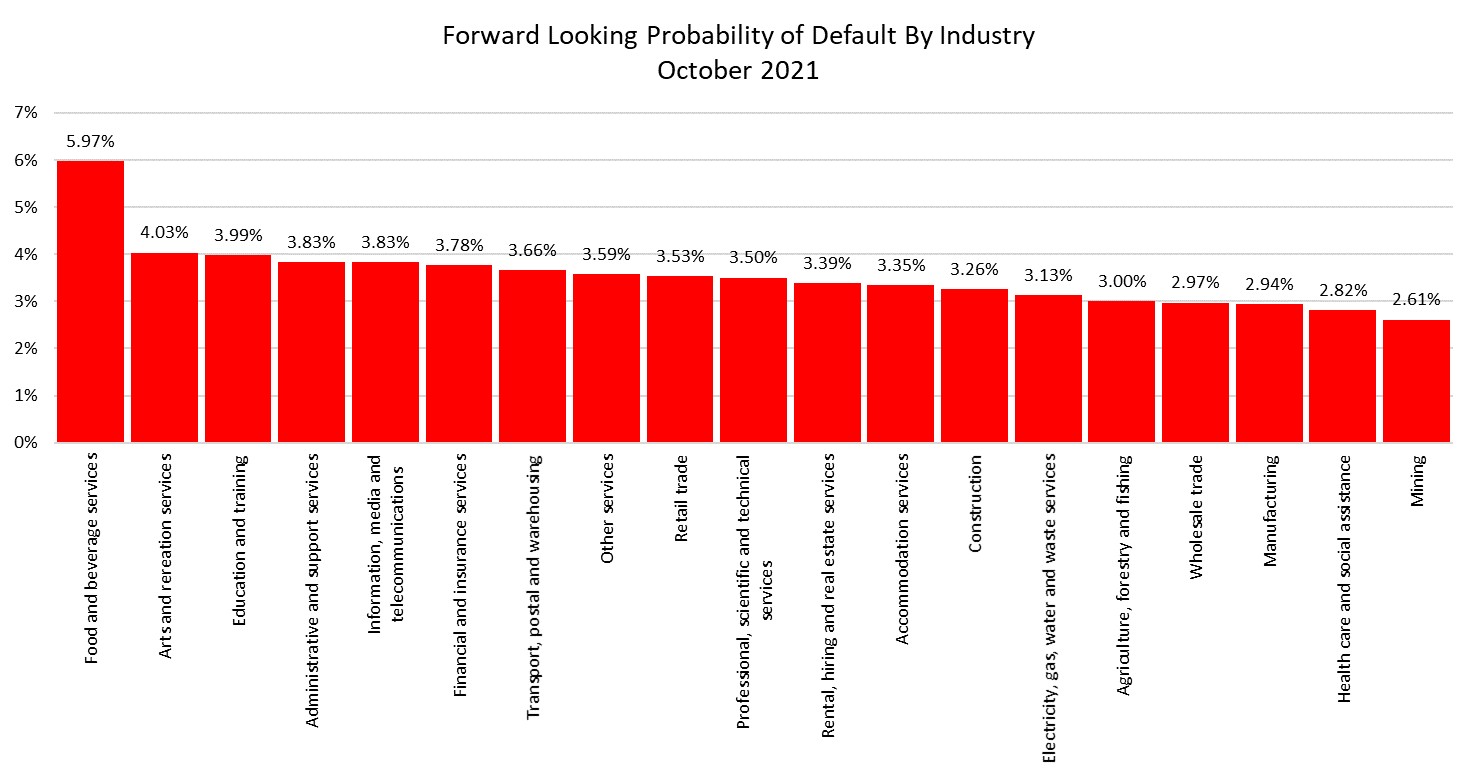 CreditorWatch’s October business risk index shows defaults are highest in the hospitality and lowest in mining.

The construction industry, which has been hard hit by lockdowns in NSW and Victoria, is the most behind on payments.

The index ranked payments arrears in the construction industry at 12.6% — more than double the health care and social assistance sector’s score of 6.2%.

Tailing construction is the hospitality industry, with payment arrears standing at 11.1% ahead of transport, postal and warehousing at 10.7%.

“That’s obviously due to the lockdowns because basically businesses aren’t trading with each other,” he says.

“Despite the bad numbers, we’re pretty optimistic it will bounce back because when we go out of lockdown, businesses will start trading again.”

The rate of insolvencies has been trending down since the pandemic began, with a range of factors keeping business closures at bay.

O’Donnell says record levels of government support, payment suspensions from major banks combined with the tax office’s lenient approach to tax collection have staved off a tidal wave of insolvencies.

“Creditors are holding off, so the banks are giving payment holidays and also the ATO is not enforcing tax arrears,” he says.

The index shows external administrations in the 10 months of 2021 compared to the full calendar year of 2019 are down by 41%.

In October 2021, administrations fell by 4% compared to the same month a year earlier.

But O’Donnell says the data show the reduction in insolvencies “has started to bottom out” and he expects default rates to start climbing.

“It’s hard to say exactly when it will spike up but we think it could be as early as the next quarter,” he says.

Iconic bag maker Crumpler has been saved from administration by its founder David Roper and his daughter Virginia Martin.

Tradies and subcontractors in parts of Victoria are facing a temporary cashflow crisis as the two-week ban on construction work continues to wipe out activity in the industry.