The Australian Business Growth Fund is close to signing the dotted line on its first investment, as it starts acting on its mission to help the nation’s SMEs grow.

First announced in 2018 and formally established in October 2020, Australia’s BGF is drawing on lessons learnt from the UK’s successful Business Growth Fund to offer SMEs patient equity capital designed to help them take their business to the next level.

The federal government and Australia’s largest banks have together put forward $540 million to establish the fund, which is hoped will grow in value to $1 billion.

The fund is being led by chief executive Anthony Healy, a passionate advocate for SMEs who has spent his career working in the sector, including during his time as the chief customer officer for business and private banking at NAB.

When SmartCompany met with Healy in Melbourne last month, he revealed the fund will soon complete its first investment — either at the end of June or early July — and already has 25 potential deals in its investment pipeline.

Healy has been busy hiring his investment team and finding offices for the fund in Melbourne and Sydney, so he has not yet undertaken much marketing or promotion for the fund.

He has, however, published a number of updates on LinkedIn. And this is how the fund’s first likely investment came about, Healy says, after the owners of the business sent him a LinkedIn message.

While Healy didn’t disclose the name of the business, he says it’s a family-run enterprise in Brisbane that had previously considered taking on private equity before the COVID-19 pandemic took hold.

The fund will only ever make minority investments, of between $5 million and $15 million, over terms of up to 10 years, although there will be cases where it makes follow-in investments too.

To be eligible, businesses must be profitable and able to show three years of revenue growth, although COVID-19 will be taken into consideration. Businesses must have annual revenue between $10 million and $100 million and be headquartered in Australia.

Early-stage startups that are pre-revenue won’t be eligible — Healy tells a story of meeting a business owner in a cafe only to find out that he had product samples in a briefcase but no sales — and the fund also won’t invest in fintech, given it is being backed by the big banks. Commercial property won’t feature in its portfolio either.

However, for companies that do fit the bill, the fund potentially offers an attractive alternative to taking on debt funding or pursuing venture capital.

This is because of the fund’s clear mandate to see the SME sector as a whole grow.

The fund has been designed to fill a genuine gap in the market for SME capital, explains Healy, who refers to 2019 figures that show more than $3 billion was invested in early-stage startups and more than $5 billion invested by the large funds that take controlling stakes in business. This compares to a figure of $300 million in SME investment.

“We’ve got a million and a half SMEs in the country and a lot looking to grow, so clearly, there’s more demand than that and it’s not being met,” says Healy.

Healy says the structure of the BGF’s investments has been “tailor-made” for SMEs, based on a clear guideline that the fund will not make majority investments, which means business owners don’t hand over control rights.

This is a fundamental element of the fund’s design, he explains, and important to those running it on a philosophical level.

“We don’t have any of those typical control rights; we can’t turf out management, we can’t sell our shareholding and drag the owner into a sale process. We’re sitting alongside them, supporting the owner to grow the business and achieve their vision,” he says.

Meanwhile, the long-term nature of the investments means the fund is not looking for immediate returns in the same way that a private equity outfit might. Whereas private equity might typically invest over a period of three-to-five years, the BGF will invest over five-to-ten years.

As part of each investment, a member of the fund’s team will sit on the company’s board of directors, and the company will also be required to appoint an independent, non-executive chair.

The fund won’t select who the chair is, instead giving businesses access to a talent network of experienced entrepreneurs and business people, who will be recommended based on their industry knowledge and experience.

“They’re not an employee of ours and their job is to provide strategic advice, mentorship and open up their networks to help the business,” Healy explains.

This access to a network of experienced advisors and mentors has been a successful feature of the UK Business Growth Fund, which has grown over a period of 10 years to now be a £2.1 billion ($3.87 billion) fund.

The UK fund was established following the global financial crisis — in similar circumstances to Australia’s fund now, Healy notes — and has to date made 331 investments and achieved 72 successful exits. It has helped generate £1.9 billion in revenue growth and 11,500 jobs.

The UK model was what first inspired Healy to start working on the concept for an Australian fund three years ago, and led him to approach the banks and the Australian government. The Australian BGF now has a commercial relationship with the UK fund, which has been helping the local fund get established. 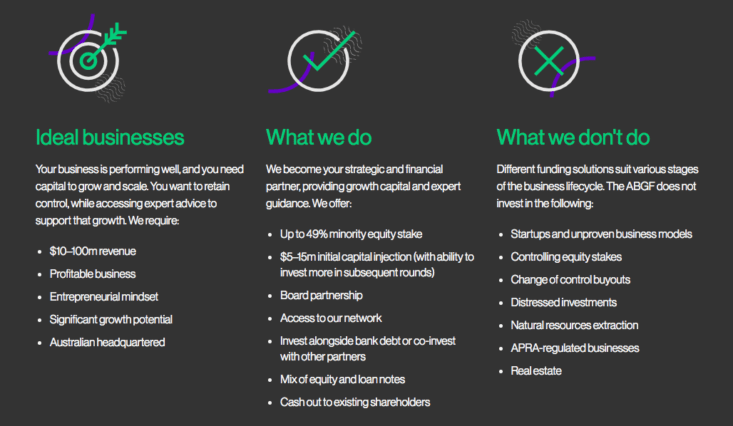 Future of the fund

Healy expects the BGF will do an average of 10 deals a year with a cheque size of $10 million, meaning the fund will likely invest $100 million in capital each year.

The fund is “industry agnostic” and will look to invest across a range of industries, from manufacturing and agriculture to retail, hospitality and tourism. As businesses apply to the fund, the BGF itself doesn’t control where the demand comes from, but Healy says some referrals will come from the banks.

The fund will also, over time, build up its own research capabilities, which will inform its investment decisions and help it undercover industries or sectors where there are growth opportunities.

With an average investment term of five years, the fund will almost be fully deployed by year five, at which time it will look to raise more capital, most likely via existing shareholders.

“This is an evergreen fund, so we don’t give the capital back,” explains Healy.

“The shareholders will be reinvesting their profits from any exits … they will be organically growing the capital.”

Again, this reflects the fund’s mission to help grow the SME ecosystem in Australia, says Healy. The shareholders are not looking to take capital out or high returns; they are seeking “modest, acceptable returns”, he says.

“They’re in it because they want to see more capital, more growth and more support for SMEs. The government in particular as a shareholder underpins that.”

It is important to note, however, that the fund is not a government entity and the government has no more voting rights than any of the other shareholders.

In the event the shareholders don’t want to continue to invest further, Healy says the fund could be externalised, which would likely mean restructuring it to treat the first lot of investments as fund A, for example, before moving to fund B.

What SMEs can expect when they apply to the BGF

To apply to the BGF, business owners must first fill out a form on the fund’s website, which includes questions about revenue and the year the business was founded.

Healy says the BGF will then contact the business within 48 hours, at which time, the owners will meet with a member of Healy’s team and share more information about the business and their growth plans.

After this point, a management presentation takes place and a deal memo is produced, which is reviewed by the fund’s investment committee. If the deal progresses to the due diligence stage, the cost of that process is shared by both parties.

Earlier on in the process, the fund and the business will have agreed on what the strategy is with the owner, and this would be reflected in the term sheet offered.

Healy’s advice to business owners interested in applying to the fund is to first be clear on “where you want to take the business and how you’re going to get there”.

This means understanding your own strengths and weaknesses, as well as your business’ competitive advantage, or as Healy puts it: “what makes them different and why they’re going to win”.

Secondly, Healy says business owners will also need to prepare for, and be open to, a different way of working.

“It will be different because you’ll have an external investor who will expect a level of governance, reporting, and involvement that you may not be used to,” he says.

More information about applying to the fund is available here.

Plus exclusiveInteractive tool: how Australian VCs have invested $9.5 billion since 2003 and how it’s being spent

How the spread of money has shifted between sectors, cities, and states since the first funds were established.

Another very modest scheme which very few small companies would meet the eligibility criteria. The scheme is really suitable for medium-sized companies. The scheme should be used to resurrect the medium-sized manufacturing companies because from 2007 to 2019 there has been a 36% decline in their number. This industry sector is the most innovative-intensive in the whole economy as it uses R & D & design to create new complex products that can be exported. It is also a source of IP & creates high-quality, high-paid jobs for professionals, tradesmen & unskilled people. It also creates hundreds of service jobs thanks to the long complex chains. Finally, the amount is too small it should be at least 5 x bigger.