A liquidator has been appointed to internationally-renowned fashion label Johanna Johnson two weeks after it fell into voluntary administration.

Johanna Johnson, which has designed dresses for the likes of Madonna, Foreign Minister Julie Bishop and Meryl Streep, called in administrators from Farnsworth Shepard on April 13 after the Supreme Court heard an application to wind-up the company.

At the time, founder Johanna Johnson said in a Facebook post it was business as usual and the administration was “simply an internal process”. She said she was looking forward to shifting the company’s operations to the United States.

However, the expansion plans appear to have hit a snag, with the NSW Supreme Court yesterday placing the business into liquidation.

Liquidator Tim Cook, from Balance Insolvency, told the ABC he will assess and sell Johanna Johnson’s assets and investigate whether misconduct has occurred.

The Daily Telegraph, meanwhile, reports Johanna Johnson owes $1.1 million to the Australian Taxation Office and $35,000 to a former employee. 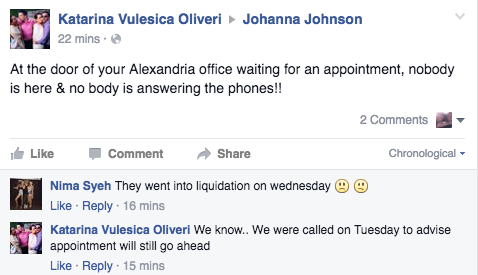 A distressed bride-to-be has posted on Johanna Johnson’s Facebook page this morning, saying she waited outside the business’s Alexandria office for her appointment.

“Nobody is here and nobody is answering the phones,” the woman wrote.

“We were called on Tuesday to advise appointment will still go ahead.”

SmartCompany contacted Farnsworth Shepard and Balance Insolvency for comment but did not receive a response prior to publication.

SmartCompany also contacted Johanna Johnson for comment but did not receive a response prior to publication.