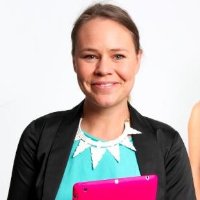 “I remember when I was 10 years old, I was doing my first ever cashflow, working out how much I needed to buy a My Little Pony,” she recalls.

“Obviously that cashflow is nothing like the cashflow for BB. It was more like, how many cars do I need to wash to buy what I wanted? From that experience, I knew I wanted to be in business.”

Fast-forward 10 years to 2008 and a 20-year-old Timmerman was fresh off the plane from a European adventure. But among all the sights she had seen travelling, she was most struck by a boutique she had visited in Paris.

“I went into an amazing store called Collette,” says Timmerman, referring to the cult high-end boutique found in the middle of Paris.

“I wanted to bring that back to Brisbane, not Collette exactly, but that experience.”

With the global financial crisis in full swing however, Timmerman struggled to find an affordable retail space to house her idea. It was then than that a friend suggested creating an online-only store – but it wasn’t the dream start she’d hoped for.

“It was very hard to convince people to sell their products online at the time,” Timmerman says, although getting the business up and running was more difficult than convincing brands to come on board.

“I paid a huge amount of money for a website they [the developers] said was going to be amazing and I believed them. It was down for 50% of the time and we lost a lot of money. At that point I had to figure out what the hell I was doing with the business.”

When a friend asked her what she’d do if it was her last day being in business, Timmerman says she had an epiphany.

“That mindset was a realisation. I was looking at the business failing, but what did I want the business to do? Running the business in that way, it became profitable,” says Timmerman, revealing the company even threw a “breaking even party” the day it started to make money.

Since then, Beginning Boutique has picked up at an incredible pace. The company now turns over more than $1 million annually and lists more than 55 brands including One Teaspoon, Staple the Label and Windsor Smith shoes. The business also successfully launched its own label recently and was named the number one social media brand in the country.

Timmerman chats with SmartCompany about why she wants Beginning Boutique to be “best friends” with its customers and how she plans to be bigger than the biggest names in the industry.

Waking up at 6.30am, Timmerman will check her ever-important social media channels before she’s even fully awake.

After a jog or a gym session, Timmerman heads to her favourite coffee shop in Brisbane’s west end by 7.30am.

“I get a coffee and use their free Wi-Fi to start work answering emails. It’s good to get some time by yourself every day,” she says.

As founder and director of Beginning Boutique, Timmerman says she wears many hats.

“Some people say that’s a bad thing, but I honestly think you should be across everything. I mean, I don’t program, but I want to know what the programmer is doing. If you don’t understand everything, you can’t make the right decisions. It’s not about running everything, but about understanding it,” she says.

“It can involve everything from going to pick up stock, to choosing a model, to working with our developer,” she says.

Timmerman says the company is in a transitional phase that requires bedding down procedures and the company culture.

“We’re in the stage of moving from a small business into a medium business,” she says.

“My biggest goal is to have happy and healthy staff as we grow. I don’t expect everyone to love each other or be friends outside of work, but I want people to respect and treat each other well.”

But Timmerman’s ultimate priority is the relationships between Beginning Boutique and its customers.

“I always wanted to have a business where the number one value was to treat your customer like they’re your best friends – that came from Colette,” she says.

And it’s clearly a value Timmerman has been successful in applying to the business. From its engaging social media presence, to its bright and conversational blog, and mobile phone-number customer service line answered by one of the company’s chirpy young staff members,  Beginning Boutique customers are made to feel like they’re just hanging out with friends.

Timmerman tends to work through to about 6pm and continues to check social media throughout the night. Yet she says her work-life balance is fairly steady.

“It’s really important to be constantly thinking about that balance,” she says.

“I’m very lucky to have a great group of friends and my husband, so I always find time to relax with them, have a few beers and just talk about nothing.”

When she isn’t glued to Facebook or Instagram, Timmerman will be hanging out with her husband, getting a cuddle from her Burmese Blue cat Louie, or going for a hike at Mt Coot-tha.

Timmerman says 2015 will be all about expanding Beginning Boutique’s own brand, improving the functionality of its website, hitting revenue goals and working on better personalisation for each customer.

Asked if she hopes to one day achieve the same cult status as Collette or other massive online retailers, Timmerman says she would prefer that years down the track people ask other retailers if they want “to be the next Beginning Boutique.”

“I don’t want to be compared to Nasty Gal or Collette. What I would really love is if BB became the benchmark,” she says.

“We’re not trying to reinvent the wheel or anything, we’re just trying really hard to do things we think haven’t be done that well online before.”

And Timmerman says she hasn’t had much of an opportunity to rest on the laurels of her success of the past seven years.

“I suppose in small business you’re always looking forward, chasing and hustling, that’s where our attention really is,” she says.