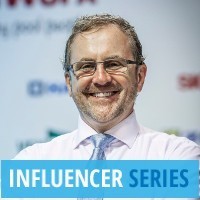 John O’Brien describes himself as “one of the old men of Australian franchising”. The 57-year-old Brisbane local has managed franchised operations for one of the biggest consumer brands in the world and, since 1992, has been steadily building his own franchise empire at pool cleaning company Poolwerx. O’Brien says franchising simply suits his personality.

From its humble beginnings with just six pool vans and O’Brien’s personal savings, Poolwerx now has 242 franchises, 1000 employees and $80 million in annual turnover. O’Brien has recently bought up a US chain of pool stores, an expansion into international waters that has been years in the making. But he’s not stopping there.

Being a business owner or entrepreneur is often in your DNA and in your family’s.

I always ask franchisees who are thinking of joining Poolwerx about why they want to be a business owner and where the desire comes from. They usually say it is because their parents or grandparents owned a business.

My great uncle founded Breville electronics after he was a radio operator in World War I so there has always been a strong entrepreneurial flavour through my family.

My parents ran hotels and I grew up listening to them talk about it around the kitchen table. I pulled my first beer at seven years of age and served a customer.

It was always in my DNA to own my own business.

I did four years of law school but didn’t become a lawyer. I knew I wanted to be in my own business but my family had always run hotels and I didn’t want to put a future family through a life in hospitality.

I knew if I wanted to run my own business, working in a Fortune 500 company would provide the best training. So I joined the graduate program at Cadbury Schweppes.

I got five promotions in seven years and I worked in HR, sales and marketing. It was the best education as a future entrepreneur you could ever have.

At 25 years of age my boss came from a Cadbury in the US and offered me a promotion to be Schweppes national franchise man. It was at a time when McDonald’s had just opened in Australia.

I said “great, what’s a franchise?” I didn’t know what it was. I thought I had been sacked.

They sent me to the United States to study franchising. When I came back we converted the 400 company employed vendor salesmen in Australia to franchises and the business took off.

I’m one of the old men of Australian franchising. Franchising suits my personality. It is all about dealing with people and helping them to be successful. I get a kick out of turning others into successful small business people.

By the time I was 28 I bought my first business. I took on a Schweppes master franchise for the ACT and then they gave me one for Queensland and then Western Australia. I did quite well out of that.

I decided in 1992 I wanted to create a franchise brand of my own.

I was in California when I saw a surfer with a big ute with a pool cleaning pole sticking out the back next to a surfboard. I thought, now that’s disorganised. The US has a whole market of disorganised pool cleaners like him.

I flew back to Australia thinking I had found the industry. And in the taxi from the airport, I was following the exact same kind of pool cleaning truck all the way home.

I did my homework and used my own savings to buy a little company with half a dozen mobile pool vans.

My first employee was a systems analyst. I wanted to build a good brand and a good system so I went about finding the best way to do pool services, with the system analyst following behind writing all our manuals. And we’ve continued that to today.

One of our values is to always find a better way. We are constantly working to make our franchises better.

Poolwerx grew quickly. We started with six vans and now we have over 300 vans. We are now one of the biggest pool service companies in the world.

Along the way we realised there was a great opportunity to move from a mobile pool service business to also opening retail stores. We wanted to create a hub-and-spoke model where the franchisee would own a store and run vans around it.

We moved from franchisees who bought a job to having a franchise with 12 staff and a turnover of more than $1 million. We’re in business with businessmen.

We have opened a new store every month for the last eight years. We now have 99 retail stores.

This move has been a long time coming. When I started the business way back then, I always wanted to create a global brand.

In 2007 we did all the work to go global. We worked with consultants and we protected our trademarks and URLs in 15 countries. We were exhibited at European trade shows.

But the Global Financial Crisis was hitting and we packed our bags and went home. It was a good decision but the time is right now.

Australians do franchising very well. We have the densest pool population in the world and we know about pools. This acquisition is not too small and not too big. It will be a great place to tweak our model over the next 12 months.

We plan to follow a classic aggregation strategy. We want to have around 300 stores across the sunbelt of the United States and we will do this by rolling up ma and pa independent stores into the Poolwerx brand.

There are 13,000 ma and pa pool shops in the US that need to do one of two things. They need help with training and marketing or they need help exiting and retiring. We can help them do either with franchising.

We’ve already had a massive response. We’ve been criss-crossing the country talking to dozens of small business owners with one-to-four stores. As we speak we’ve got 30 interested parties.

To make a good franchise system, one ingredient overrides all the others. That is a system that is constantly focused on improving the profitability of the franchisees each year.

Your number one key performance indicator should be average franchisee profit. If you focus on that, your other problems will go away and everyone will be happy. In 23 years I have never been to court with one of my franchisees.

When franchisees join your brand, they are putting their life savings on the line to create a better lifestyle for their families. Your job is to deliver that.

A business plan is essential for an organisation to survive. The fish rots from the head.

We have a constant 10-year rolling plan. We created the last one in 2010 called the 2020 plan and every year it rolls on for another year. Every single franchisee creates a five year plan and every year they re-do that plan with their business development manager, while also doing quarterly reviews.

As the CEO, it is my responsibility to not just be the visionary but the person that guides that vision into place.

If you know your business and know your market, there’s always more money under the rocks. You just have to keep picking up the rocks to find the next pot of gold. Never stop and never rest. Always be innovative.

I’m a great believer that focus is everything in business. I’ve tried my hand at other things but pulling on one guernsey in the morning is enough for me.