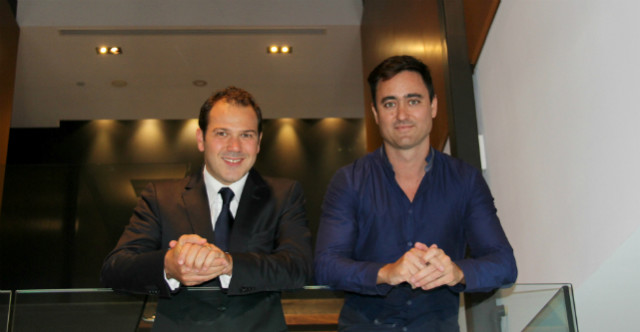 Melbourne HR tech startup LiveHire has commenced trading on the Australian Securities Exchange after successfully raising $10 million through an initial public offering that valued the company at $40 million.

But co-founder Michael Haywood won’t be constantly checking his company’s share price on the day – he’ll be too busy getting married.

“I’ll be walking down the aisle whilst fielding broker calls,” Haywood told StartupSmart the night before the listing.

But fellow co-founder Antonluigi Gozzi says it’s a company-wide rule to not check how the startup is faring in the public market.

“We have a rule that people in the business can’t talk about the share price,” Gozzi tells StartupSmart.

“That’s an outcome for what we do, not an input. We understand that markets go up and down; industries go in and out of favour.

“That will change over time quicker than the business. We’ve always said we will steer a true course. We’re here to build a global tech company.”

Despite the big milestone, Haywood says nothing will change internally.

“We’ve got a fixed rule that it’s business as usual,” he says.

The five-year old startup’s IPO comes amid much debate surrounding early-stage tech companies using the ASX as a funding route despite having low revenue.

The ASX is currently considering proposals to shut out many of these startups by raising the financial thresholds to list in order to maintain the “quality and integrity” of the market.

But after completing four private funding rounds, Haywood says the time was right to take the company public, despite the low revenue.

“For us it’s about scaling right now,” he says.

“Revenue is incredibly important for tech companies, you need to know how you monetise and that you have clients that see value in your product.

The founder says he supports the ASX’s recent proposals, saying that it would be a “very good thing”.

“It’s very important to go through that private phase and not look to list too early,” Haywood says.

“We’ve seen a change in guard – now ASIC is being very diligent and tightening the reins on companies getting into the public market. That level of scrutiny is only going to further enhance the brand and reputation of the ASX.”

Haywood says startups should rely on private funding until they have proven product-market fit, something he says LiveHire has achieved.

“For companies looking to come through, make sure you spend time in the private sector and successfully complete a minimum of three funding rounds,” he says.

“Really find the time to make sure you have very good product-market fit and are in a good scaling phase because once you hit those open screens, it’s foot down and accelerate time.

“You can’t be trying to find your fuel when you’re in that open environment.”

While critics says young tech companies going public with little revenue could tarnish the market as a whole, Gozzi points to Xero as an example of a startup that completed an IPO very early on, to great effect.

“They listed much earlier than we did, in year one – we’re in year five,” he says.

LiveHire did consider closing another round of private funding, but the team decided that it was time to take the startup public.

“We’re always looking to A/B test and look at the positives and negatives when at a fork in the road,” Haywood says.

“The private funding round for us was not the best option in terms of being able to scale the business as fast as we needed to.

“We reached a fork in the road and weighed up the pros and cons and decided that the public environment was the ideal fit for us.”

Despite the recent popularity surrounding backdoor listings, Gozzi says this was never considered, and now it’s up to the market to decide whether it’s worth investing in LiveHire.

“LiveHire deliberately from day one never intended to do a backdoor listing,” he says.

“This is a natural step for the organisation, just like it was for Xero. It’s one step of many for us in the future and we’re very proud to engage with the broader investment community in Australia.

The plan from day one

Gozzi says an IPO was always the plan from day one, and has been in the works for more than a year.

“The IPO process is about testing the business for resilience and testing that the ship has been built with a strong vision.

“For us it was a long plan – it started a year ago with an internal initiative. We had a whole team dedicated to making sure the company was mature, commercial and strong enough to be performing well in the listed life.”

The cash injection from the IPO will be used to accelerate LiveHire’s growth strategy in Australia and look to expand internationally, as well as developing sales and business development capabilities and investing in the company’s technology.

“It’s not a matter of if, it’s a matter of who and when this will be done globally. That’s why we’re doing it and why there’s lots of positivity and momentum around the business.

“The business is kicking goals, we’ve got very positive traction and we’re using this as an opportunity to educate investors about the business.”