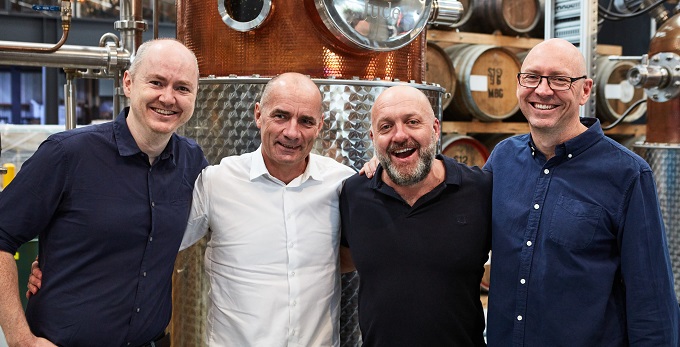 Aussie-owned Four Pillars Gin is eyeing the top of the world’s gin market and will double down on international expansion in the coming years after selling 50% of its business to multi-national drinks giant Lion.

The award-winning business — founded by Stuart Gregor, Cameron Mackenzie and Matt Jones in 2013 — will look to lay its claim in the international duty-free market as well as explore further opportunities in Southeast Asia and mainland Europe.

Speaking to SmartCompany, Gregor wouldn’t say how much Lion paid for its stake but said they got “more than expected” after turning down multiple other offers over the last 18 months.

“Now it’s about growing internationally, but also consolidating where we are in Australia … we want to be over Hendricks,” Gregor says.

“It sounds odd, but we think Australia can produce the best gin distillery in the world.”

The deal is Lion’s first foray into the craft-spirits market following several years of consolidation in the craft beer industry, which has seen it and competitor AB InBev go on a spending spree, acquiring up-and-coming businesses en masse.

Gregor says Four Pillars’ sales have been doubling annually as the business has expanded into more than 20 countries in recent years.

Four Pillars has 28 other investors, including friends and staff, while Gregor and his co-founders will continue to manage the business.

Asked how he felt about selling half of Four Pillars to a multi-national, Gregor said the investment will supercharge their vision for the business.

“Many of the great spirit brands in the world we drink every day ladder up into global businesses,” Gregor says.

“The key thing for us is to maintain our integrity.

“The vision will be even clearer now — we can do things we wanted to do. It’s the ambition we’ve always had with less concern about how we’re going to pay for it.”

Gregor says the global duty-free market will be a big opportunity in the coming years and hopes Lion’s expertise will come in handy.

Southeast Asia, where sales grew over 100% last year, will be an initial focus.

“Singapore is an incredibly important cocktail market, not just in Asia but around the world,” Gregor says.

Mainland Europe, specifically Nordic countries such as Denmark, will also be a focus alongside the UK, which is traditionally the biggest gin market in the world.

For Lion, which already owns beer brands such as Little Creatures, James Squire and Furphy, the investment is a venture into the craft-spirit space.

“What Matt, Cam and Stu have done in creating Four Pillars in just over five years is nothing short of remarkable and we want them to keep their hands on the wheel, while we offer advice, counsel and assistance,” Lion managing director James Brindley said of the deal.

Reflecting on the craft-spirits movement, Gregor says small distillers shouldn’t go cap in hand to drinks giants if they want the best outcome.

“Build your business yourself. You have to build it with the passion of people, who are essentially your family,” he says.

“Build it to be something first, don’t build it looking for a sale or investment, build it because it matters and means something.

“And then let them come to you. We never once actively sought a buyer.”

NOW READ: What it takes to run a successful craft beer business in Australia