Why these business owners are raffling off their $200,000 beachside cafe

If the thought of selling your business sounds too hard for you, why not just raffle it off instead?

That’s exactly what SME owners Laura and Matt McNamara are doing with their Phillip Island-based cafe Island Whole Foods, giving anyone a chance to own the profitable business for $15 a ticket.

Raffling off a business isn’t an entirely new concept, with a number of SME owners having previously tried the tactic to varying success. It was one of these previous raffle attempts that inspired the McNamaras to give their business away, with Laura telling SmartCompany the pair felt it was a better alternative than selling the business.

“When we looked at selling the cafe, the focus was on what we can get out of it, and how much money we could make. But when you’ve poured your heart and soul into a business, it’s hard to put a price tag on it,” she says.

“The idea came to us about two months ago, and the idea is around giving back. Instead of selling it being the focus, giving it becomes the new focus, as a way to give someone who’s always dreamed of owning a business the chance to make that happen.”

The McNamaras will use whatever proceeds they receive from the raffle to fulfil their five-year-long dream of travelling around Australia by caravan, taking their two and four-year-old children with them. Tickets cost $15, with $2 of that going to local charities including Take 3 For The Sea, and another slice going towards the legal and publicity teams that have been hired for the raffle process. 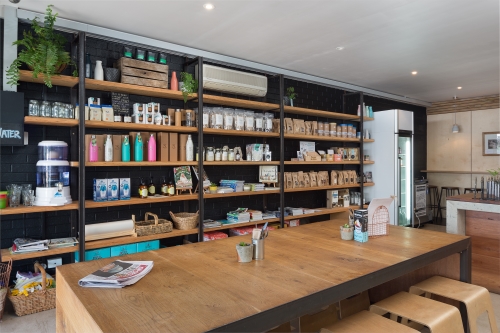 According to the founders, Island Whole Foods has a turnover of $500,000 and sales are increasing year on year. The lucky winner of the cafe will also receive $10,000 in cash, $4,000 in stock, rent and all body corporate fees paid until next March, around $100,000 in assets and fixtures, and all taxes and costs associated with transferring the business and lease will be covered by the previous owners.

Laura says many family members and friends were confused about the raffle process, but have now come around to the unorthodox way of exiting a business. The 11-week campaign has been running for just one week, and so far the pair have sold a couple of hundred tickets.

“That’s the risk on us if we only sell a small number of tickets, especially as we’re donating a portion and we want to leave the cafe debt-free,” she says.

“If we’re worse off at the end of it then we have to sit with that and feel comfortable with it.”

It’s official – You can WIN Island Whole Foods!! We are giving one lucky person the opportunity to live out a dream of owning their own cafe on stunning Phillip Island. We will be donating $2 of every entry to the incredible @take3forthesea and local charities who are doing amazing things in our very own community.. . For the full video, all the details on how to enter, T & C’s, prize inclusions and Q & A section click on the link in our bio.. . What would you do if you won it?? Tag a friend and share this dream opportunity ????????‍♀️???? x

Not for the faint-hearted

Raffling off your business is an unusual path to take and Laura recommends it only to business owners with “thick skin”; compared to a traditional business sale, it’s not for the faint-hearted, she says. The two business owners have had to invest a chunk of their own money to get the raffle promotion off the ground, but they’re hopeful it will continue to gain momentum.

“We know we’ve got a good product. We’re number one on TripAdvisor for Phillip Island, and we’ve had a lot of interest from people wanting to buy the cafe,” she says.

Laura doesn’t know what the eventual new owner of Island Whole Foods will do with the business but says that unknown aspect is one of the exciting parts of the raffle. She and her husband will support whoever the new owner is, and they’re hoping they’ll be keen to continue the 100% plant-based cafe.

As for her and her husband, Laura says starting up another business isn’t on the radar, with the two now focusing on educating individuals and businesses around how to reduce plastic waste.

NOW READ: Why Das Hund Haus owner James Sneddon is giving away his pub in a raffle so he can enter the world of startups