“Mixed emotions”: Why David Prior says his $80 million sale of five:am is bittersweet 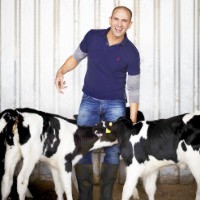 Off the back of the $80 million sale of the yogurt business he began just five years ago, David Prior says he definitely has “mixed emotions” about the sale of five:am.

“I’m happy with the outcome and happy with PZ Cussons as the acquirer,” Prior told SmartCompany.

“But myself and my family are definitely sad because it’s a brand that has come out of me.”

“The whole thing about five:am – the early mornings and the surfing – is a big part of me. But that’s business and I think sometimes you have to roll with the punches.”

The punches shouldn’t hurt too much though – on top of the $80 million cash deal, five:am is up for another $14 million if it performs well over the next financial year.

Founded in 2009, five:am had its big break when it was picked up for distribution by supermarket giant Woolworths in 2011. Since then, Prior had focused on expanding the brand nationally before he began to look at overseas potential last year.

Prior had originally considered an initial public offering for the company after it launched into the Asian market earlier in the year, but says it didn’t feel like the right direction for his business.

“I didn’t feel the public space was for me,” he says.

“While we run a business that is very high on financial diligence and transparency, I’m an entrepreneur so a lot of things are gut-feel decisions.”

Gut feelings are an important part of Prior’s business acumen, as he says there were more factors than price at play when he made his decision to sell to Cussons.

“Cussons actual cash offer wasn’t the highest offer on the table but we had such a strong reliance on them in terms of vision and values from the start,” he says.

Prior says he wanted to know five:am was going to the best possible place, and thinks Cussons showed a respect for the brand and an all-important vision to further expand its Asian presence.

“The big thing for five:am is that push into Asia,” says Prior.

“Obviously as more and more Asian consumers demand the best quality products for themselves and their family, Australian food has a big role to play in that.”

“China’s now the next big thing and we’ve been involved in multiple discussions with large retailers.”

Prior will remain chief executive of five:am until the end of October and says he will sit on the five:am board as a non-executive director for at least another year.

But he does imagine his work load will get a little lighter as he looks for new endeavours.

“After October I’ll probably go surfing for a while and think about what’s next.”