Murray Goulburn and the consequences of choices: Lessons from the big end of town

“Turning and turning in the widening gyre
The falcon cannot hear the falconer;
Things fall apart; the centre cannot hold;
Mere anarchy is loosed upon the world…”

• Close three manufacturing facilities with a loss of 360 jobs;

• Abandon the clawback from farmer suppliers of the ‘FMP overpayment’;

• Suspend its dividend with immediate effect and review the dividend payout ratio.

The cause of all these actions is significantly lower milk supply, expected to be 22% lower than last year. The lower milk supply is a consequence of farmer suppliers reacting to the April 2016 announcement and leaving the Co-Op.

By abandoning the clawback proposal, Murray Goulburn has admitted it did the wrong thing by its farmer suppliers.

The real question is whether this admission has come quickly enough to stem the loss of farmers and milk.

The loss of milk supply has had entirely predictable outcomes on Murray Goulburn’s production efficiencies. Factories have high fixed costs and when throughput is reduced, the cost of production rises. So, in the absence of milk, Murray Goulburn had no option other than to reduce its production capacity.

The corollary of a rising cost of production is an inability to pay farmer suppliers a competitive rate for their milk.  Murray Goulburn’s FMP for financial year 2017 (FY17) at $4.95/kg of milk solids is the lowest amongst its competitors. Bega Cheese is currently paying $5.13; Fonterra is paying $5.10; Saputo is paying $5.25 and Lion $5.10/kg of milk solids.

To make matters worse, Murray Goulburn expects to receive only $4.60/kg of milk solids from its trading activities and is covering the last 35c/kg from higher borrowings.

Murray Goulburn was the price setter for milk payments in Victoria, South Australia and the New South Wales Riverina. It looks to me like that is no longer the case — another consequence of its self-imposed problems that led to the April 2016 decisions.

Okay, let’s see if we can put some meat on the bones of Murray Goulburn’s cost of production. 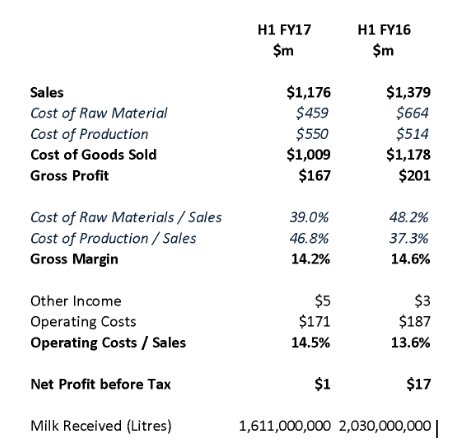 From the table, it is apparent that:

• The cost of raw materials (milk Payments to suppliers, disclosed in the notes to Murray Goulburn’s accounts) fell to $459 million in H1 FY17, from $664 million in H1 FY16. The cost of raw materials represents 39% of Sales in H1 FY17, which is a much lower level than the 48% of Sales in H1 FY16. The remaining farmer suppliers are getting a smaller piece of a smaller pie; and

If Murray Goulburn can’t bring its cost of production down quickly then it risks losing more farmers and more supply to other processors. It is on the edge of a spiral that it may not be able to control.

Murray Goulburn, like all export orientated milk processors, is a business that cannot control the major drivers of its earnings — commodity price, currency and weather. Its only defence is a strong balance sheet. Right now, because of the write-off it has just announced, its balance sheet has been weakened. If it continues to borrow to move its farmgate price closer to that of its competitors, then its balance sheet will continue to weaken; borrowing to supplement its FMP to maintain a competitive position is code for borrowing to covering a loss. Further, it is unlikely to get support for a recapitalisation from the investors it has just burnt.

In short, Murray Goulburn needs everything to go right in terms of the commodity price, currency and weather factors that influence its earnings.

We’ve seen this before with Bonlac in the early years of this century. Bonlac’s issue, while different, had the same impact in that it was unable to pay a competitive milk price. Add to this pressure on its balance sheet from an expansion program and that business eventually fell into the hands of Fonterra.

So, what are the lessons from recent events at Murray Goulburn for owners of small and medium size business? Here are a few:

So, what do you think? Are there other lessons for owners of small and medium size business from this situation?