Murray Goulburn and the perils of serving two masters: Lessons from the big end of town

Murray Goulburn released their unaudited, year-end report this week. It was a surprising result, with an increased profit being reported in the 2016 financial year along with the payment of a dividend. At face value, it didn’t sound like a business struggling so much that it had to slash the payment to its suppliers.

Intrigued, I thought I’d take a look at the company’s information and see what is going on behind the headline numbers. I wondered whether there would be lessons for owners of small and medium size businesses.

Here is a snapshot of the Murray Goulburn profit and loss statement: 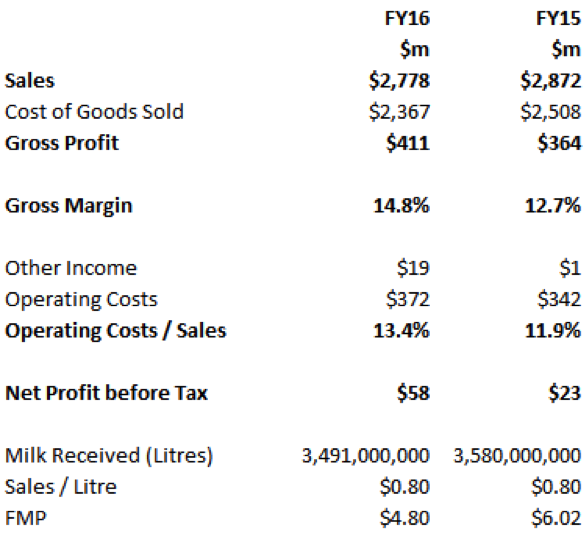 You will see there has been no change to the sales per litre return at 80c, a better gross profit and gross margin, but a business that slashed its payment to suppliers, from $6.02 in FY15 to $4.80 in FY16.

I don’t know about you, but the numbers don’t match the travails of this business in the 2nd half of FY16.

Under the pool payment system the supplier members of a co-op receive what is left over once the cost of production and cost to run the business has been deducted from the revenue of the business.

Now, in practice, an indicative pool price is set at the start of each year (or season) and that price is adjusted as the season progresses and the interplay of sales volumes and commodity prices is realised. Usually, the indicative price is set conservatively and supplier expectations managed by delivery of a final realised price somewhat better than the initial pool price.

Right, so knowing this, what else can we discover from the additional info in the Murray Goulburn report?

The pool payment made by Murray Goulburn is disclosed in the notes to the results announcement. When deducted from the cost of goods sold figure what remains is the cost of production.

Here is the snapshot of their profit and loss statement updated for this information: 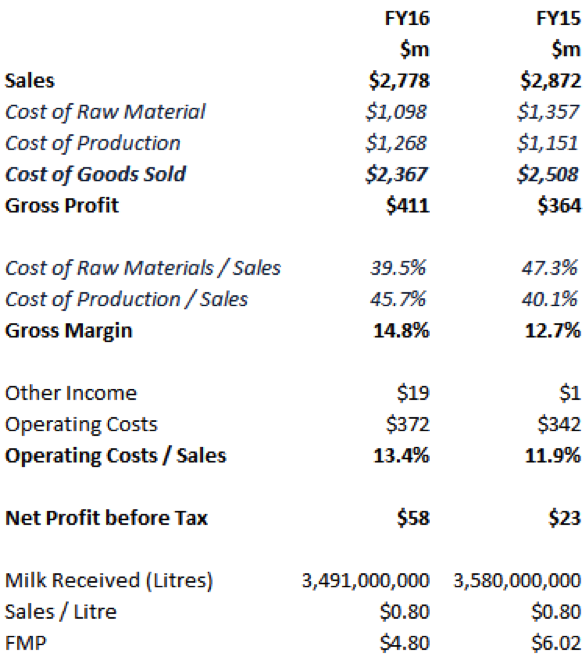 We know about the supplier payment issues and that is obvious when you look at the change in the cost of raw materials relative to sales – reduced from 47.3% to 39.5%.

If this was my business, I would like to know a little more about what is happening to the operational efficiency of my factories.

What other devils are in the detail? Well, we know that Murray Goulburn has declared the “overpayment” of this year’s pool price will be treated as a loan to the supplier members, to be repaid over three years (through deductions from future pool outcomes).

To do this, they have taken $183.3 million of payments made to their supplier members out of their cost of raw materials and capitalised it on their balance sheet as a loan.

Let’s take a look at their position if they had not taken that action: 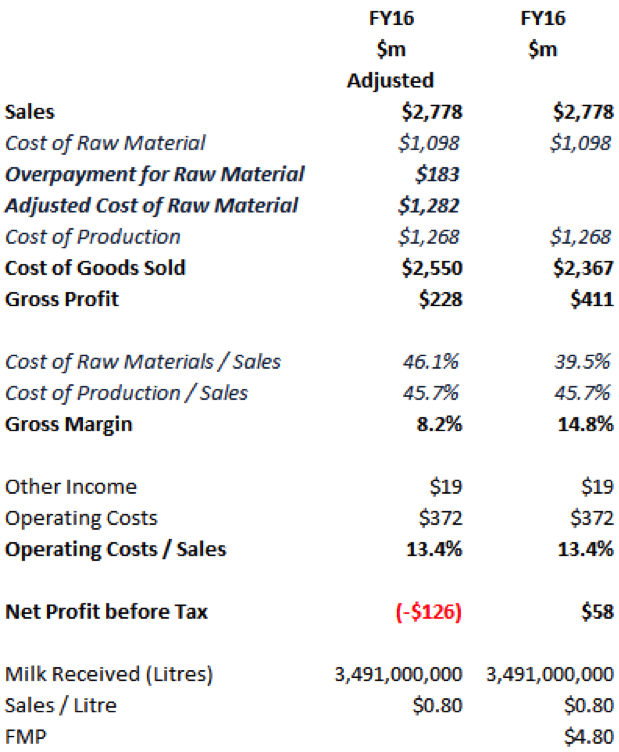 You can see from the FY16 adjusted column in the table above that classifying the $183.3 million as a payment to suppliers (not as a loan to supplies) would have increased the cost of raw materials to $1,282 million and lowered Murray Goulburn’s announced gross profit to $228 million.

The consequences would have continued to flow down the company’s profit and loss statement, ultimately manifesting as a loss of $126 million. The operating cashflow of the business would have been an outflow of $98 million, not an inflow of $86 million as announced. Quite a different position to that announced, and more in line with the issues faced by the business.

Remember, the net profit of Murray Goulburn is essentially worked out in reverse, by adjusting the pool payment. The choice made by Murray Goulburn means it can announce a profit and pay a dividend to its supplier members and its unit-holders.

But, I wonder, should a dividend have been paid at all? The business performed poorly and it seems wrong to pay a dividend in a poor year.

The next obvious question is whether the payment of a dividend means one class of owner has been advantaged over the other?

The supplier members will receive a total dividend of $25.9 million relating to FY16, and it counts towards their overall return. So, adjusting for this amount, I reckon that had Murray Goulburn declared a break-even result then the supplier members could have been paid an additional $32 million, a 17% reduction in the clawback amount.

It seems to me that serving two masters is devilishly difficult.

And the lesson for owners of small and medium size businesses? Well I think it is dig in behind the numbers to understand what is really going on. As the owner of the business it is in your interest to do this.

Good analysis Michael. Having done some work with MGC in 2014 during the ‘$1-milk for Coles’ expansion, personally I found the culture not to be one that was in search of Manufacturing Excellence, so the increase in manufacturing costs is not surprising.

A good analysis, and any company which capitalises expenses is a no-go for me. If you examine them carefully, you will find that all businesses in Australia which operate on the “grower cooperative” model are poorly managed and generally struggle to do things well.