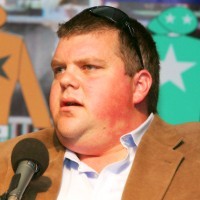 Everyone knows Harvey Norman co-founder Gerry Harvey will want to mop up the last of his debt, but the Australian Taxation Office will also be watching closely when the first of former mining magnate Nathan Tinkler’s four stud farm auctions gets underway this Thursday.

The Tax Office has taken the unusual step of registering two mortgages over the stud farms following their recent deed of settlement with the coal baron.

Title searches show one deed relates to a $20.1 million debt, signed last month between the Tax Commissioner and Tinkler himself (and witnessed by his sister Donna), five Patinack entities, and the companies that own the Newcastle Jets A-League team and formerly owned the Newcastle Knights rugby league team.

A separate deed over a $19.5 million debt, signed in May, is between the Tax Commissioner, the Tinkler group of companies and four Patinack Farm entities.

Tinkler reportedly owed Harvey about $40 million and was forced to break up his beloved Patinack Farm operation after a touted $130 million sale to a Middle Eastern consortium, led by mysterious Dubai-based Cibola Capital, fell through earlier this year.

A four-day total stud dispersal sale at Harvey’s Magic Millions auctions on the Gold Coast netted $34 million. Reports suggested Harvey has either been paid in full or was close to being extinguished. It is unclear whether the Tax Office ranks ahead of Harvey, or vice versa.

Listing agents expect somewhere between $43 million and $60 million is likely to be recouped in the four stud farm sales over the next fortnight.

The Australian Financial Review reckoned the sales would leave Tinkler with a fortune of $50 million to “play with” but the tally does not include outstanding tax debts, or the other unpaid creditors lining up against him.

Auditors Ernst and Young filed a wind-up application against a number of the Patinack Farm entities in July, andCrikey is aware of numerous other claimants who say they are owed money by Tinkler.

Once a billionaire, Tinkler had hoped to use the proceeds of the Patinack Farm sale to fund a comeback in the coal industry, but a deal to buy the mothballed Wilkie Creek mine from American giant Peabody Energy collapsed in August.

A former mine electrician from the Hunter Valley, Tinkler struck it rich in 2008 when he sold his stake in the Middlemount coal project to Macarthur Coal, reaping a $442 million cash windfall. In a giant shopping spree he snapped up mansions, jets, supercars and football teams and blew an unprecedented $300 million to establish his own racing dynasty, Patinack Farm, fulfilling a childhood dream. Over the past two years, Tinkler has lost control of most of his assets. The NRL took ownership of the Knights in June, and the Jets are for sale.

The price estimates for the four ­Canungra properties range from $18 million to $23 million in total.

LJ Hooker agent ­Cameron McPhie has advised at least five international buyers have inspected the property, with three from Hong Kong, and one from Europe and one from the US.

Patinack Farm’s 1397-hectare Tremayne property in Broke will also go up for October 30 auction with sale estimates around $6-$9 million.

The final Patinack property Banoon, in Monegeetta, Victoria, has been scheduled for an October 31 auction with Keating Real Estate suggesting a sale between $2 million and $3 million, which would represent a loss.

*Paddy Manning is the author of Boganaire: The Rise and Fall of Nathan Tinkler, published by Black Inc and available in bookstores now (RRP $29.99).