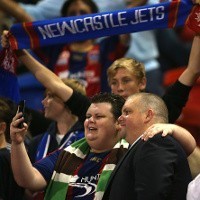 The governing body of the A-League, Australia’s national soccer competition, has acted swiftly to revoke the licence of the Newcastle Jets following a dramatic move by former billionaire Nathan Tinkler to call in administrators to take control of the club he purchased for $5 million in 2010.

The Football Federation of Australia (FFA) had given Tinkler until 4pm on Wednesday to pay the club’s salaries for this month, as well as clear other debts, including rent. However, he chose to call in administrators, telling the Daily Telegraph he needed more time to finalise a sale of the club to Scottish club Dundee United.

“I’ve been in negotiations with the FFA over the last few days and wasn’t able to get them to guarantee the licence, and I haven’t been willing to pay wages unless they guaranteed that, so I’ve put the club into administration for now,” Tinkler said.

“We’ve had an offer in for a couple of weeks from Dundee United. That offer is well in excess of the debts of the club and I’ve asked the administrator to get that sale done and that will see everyone get paid.”

But just hours later FFA announced it had terminated the club’s A-League licence and planned to establish a new entity to operate the Newcastle team, a decision it said was “based on material breaches” of the licence “in relation to non-payment of players and staff, and an ongoing failure to meet standard operational requirements”.

FFA said in a statement on Wednesday afternoon the appointment of administrators is “in itself an act of insolvency and a breach of the A-League licence conditions”.

FFA chief executive David Gallop said in the same statement HSG had been given opportunities to continue as the owner and operator of the club’s licence but was unable to meet the conditions required.

“HSG has behaved in an erratic way towards the players and staff of the club in failing to meet basic obligations to pay wages,” Gallop said.

“Anyone who takes control of a sporting club has an obligation to respect the people and the traditions of that club. HSG has failed in this regard.”

“Today’s action to terminate the licence is the first step to restoring the proud traditions of football in Northern New South Wales.”

Gallop said the association will continue to talk to “several parties” interested in owning an A-League club in Newcastle. The FFA confirmed a club from Newcastle will remain in the A-League and Newcastle Jets players will be offered contracts with the new entity.

Earlier in the day administrator James Shaw said he had discussed the Newcastle Jets’ licence with FFA and was “waiting to see what position the FFA takes”.

“The administrator will be undertaking an urgent assessment of the financial position of the company and at this point in time only has limited information,” Shaw Gidley said in a statement.

“The position will become clearer over the next 24 hours.”

If the takeover is approved by Orca shareholders, Tinkler will control a joint 75% share of Orca, with Tinkler’s Singapore-based Bentley Resources to team up with Trepang Services, an entity controlled by Nick Paspaley and John Robinson Snr, to invest a total of $20 million in the company.

A former Hunter Valley mine electrician, Tinkler has made and lost his fortune through speculative coal plays in 2009 and 2012.

After losing much of his mining fortune when coal prices slumped in 2012, Tinkler attempted to re-enter the coal game in May 2014 with the $150 million purchase of Peabody Energy’s Wilkie Creek mine in Queensland. However, the deal came unstuck when Tinkler missed a payment on the Peabody acquisition just months later.

SmartCompany contacted Tinkler but did not receive a response prior to publication.