Does Netflix’s drop in value signal the end of market patience for profitless giants?

An unbelievable fall. After slipping a startling 35% in a single day on Wednesday, one of the biggest names in the US stock market has lost two-thirds of its value in just six months. Netflix has been shedding customers, and confessed to the stock market this week it expects to lose more. Earnings per share are holding on, but only just.

With competitors crowding in, investors lost patience. This is a marker of a great economic change. And it is only just starting. 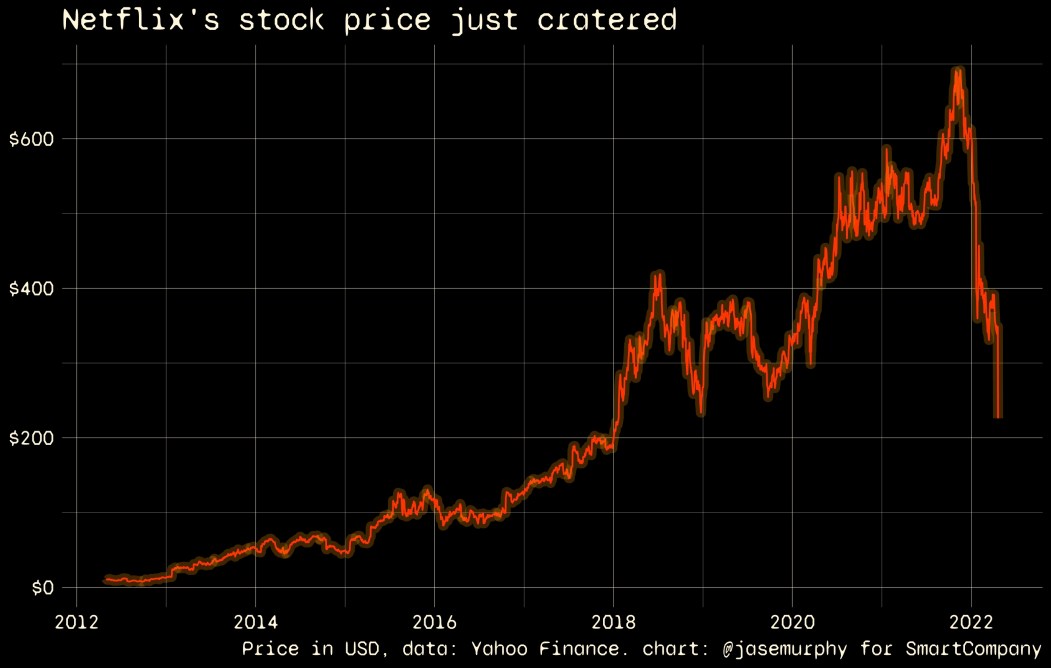 The last seven years have been characterised by extreme patience. No profits? No worries. Investors sat back and waited. What was the alternative? Invest in Swiss Bonds? Those were paying negative returns. But in 2022 the market began to change. The yield on Swiss 10-year government bonds shot back up above zero and has stopped rising. Global interest rates are going up fast.

The link from interest rates to investor patience is vital to grasp. With inflation low and safe returns low, a dollar next year is very similar to a dollar now. This is a “low discount rate”. But when the equation changes – when prices rise and safe rates of return rise (e.g. bond yields or term deposits), people have a “high discount rate” — a dollar today is worth more than a dollar next year.

Don’t forget a lot of these tech firms aren’t even promising a dollar next year. More like in 2030.

Many venture capitalists who pursued growth at the expense of profit will be asking their companies to now pivot. “Can you raise prices?” they will ask. “Can you cut costs?” There’s many such companies; the proportion of companies that were profitable in the year after listing on the US stock exchange fell to just 20% in 2020.

One sign of extreme patience was when stock market spruikers stopped talking about price-to-earnings ratios. They began talking about price-to-revenue ratios. Who needed profits? Then firms with almost no revenue started attracting massive valuations and talk of ratios disappeared altogether. We won’t even talk about cryptocurrency.

What Netflix shows us is that earnings (i.e. profits) are about to matter again. And investors are saying that Netflix’s earnings alone don’t justify its valuation.

The secret sauce of Netflix: No Rules Rules

Some people have been warning about this moment for years. If one investor is patient and is willing to forego profits to obtain growth that’s great. But what if everyone pursues the strategy? They might grow the total market by making the product very cheap to buy. Could the market grow too big to be sustainable?

Netflix is already complaining that the problem is it is running out of new people to show TV to.

Netflix has hatched plans to make more money, but they smell of a touch of desperation.

The streaming service has long let multiple households share a single log-in. “When we were growing fast, it wasn’t the high priority to work on,” the CEO said this week. “Now, we’re working super hard on it.”

It also intends to show advertisements. A huge reversal, even if they are for now only on lower-priced plans.

Charging more and showing ads are a sign Netflix wants profits more than growth. What is unclear is how much the total market could shrink if all streaming services start to charge enough to make fat profits.

Uber is another example of a company that has grown via low prices. It has made appalling losses despite being the market leader in a space that is nearly mature. Every ride you’ve ever taken in an Uber has been cross-subsidised by the company’s investors. Uber debuted on the stock market at $42 in 2019 and is trading at $33 in 2022. If it is forced to try to lift prices enough to raise profits it might find revenue drops instead.

Amazon has also been gentle in extracting profits, preferring to extend its superhuman reach across the globe. The idea, as it was popularly understood, is Jeff Bezos would wait until he has global dominance, then raise prices. He may not be able to wait any longer. Patience in the market is evaporating. Reward will flow to firms who are profitable now.

A change is here. And you saw it on Netflix first.

COVID-19 has been good business for Netflix, but will that success continue?

Will streaming giant Netflix win the game? Or will the post-COVID-19 TV world get even more diverse and affordable for viewers?

Disrupt yourself: Netflix co-founder Marc Randolph on why the fledgling startup walked away from 99% of its revenue

Startups have to be willing to disrupt themselves if they're to have the best chance at long-term success, according to Netflix co-founder Marc Randolph.