On the right route: How Raaj Menon went from selling routers out of his home to taking his $10 million company PCRange global 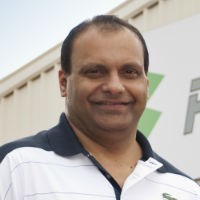 PCRange founder Raaj Menon says he got his big break while he was still operating the business out of his home in 2002, through a post on internet forum Whirlpool.

A writer for the forum posted an article about the Billion branded routers he was exclusively importing from Taiwan because they retailed at half the price of other routers being sold in Australia.

“He posted it on Whirlpool and it was a big story because the price point was so low,” Menon tells SmartCompany.

“It got a lot of media attention because they cost below $100 and most products were around the $200 range at the time. I immediately started getting calls from ISPs, from everyone. I was very overwhelmed, I was like oh my god, I was just a one-man band,” he laughs.

Menon found himself quickly hiring staff to help him keep up with demand and soon got the attention of industry big hitters, include Internode founder Simon Hackett, who urged him to expand PCRange’s range of routers to the popular FRITZ!Box Routers.

Fast-forward a decade and the Adelaide-based business, which now turns over around $10 million annually, is making a new splash with the release of its anti-virus engine and product suite, SecuraLive.

One of the few anti-virus software owned by an Australian company, SecuraLive has just scored PCRange major international clients in the US and Asia. The software, which allows companies to market the product with their own brand, has also captured the attention of enterprise-level customers in Australia. Menon says its success has put the company on track to double its turnover for the coming financial year.

Menon sits down with SmartCompany to chat about how he learnt to let go of his one-man band as it grew into a global company and why he thinks entrepreneurs must keep evolving.

Starting his career out as a pilot and flight instructor in San Francisco, the Malaysian-born tech entrepreneur says he fell into “computer stuff” after getting frustrated with waiting for the fog to clear over Silicon Valley. He has launched a number of different businesses over the years, including gaming developer Ellipse Studios.

Although Menon’s remained a late-night worker, he says his morning routine has changed a lot over the years as he’s shifted from being a night owl into a reluctant morning person.

“It’s just harder harder to sleep in. Even on Saturdays, I tell myself to sleep in today and bang, by 6.30-7am I just cant sleep in any more – its terrible,” he laughs.

Despite the earlier mornings, Menon will still work through lunch until 11pm at night, dealing with his team in India and clients in Europe and Asia.

As chief executive of the company, Menon describes his main role at PCRange as the “ideas man” and says he spends plenty of time travelling, sourcing new products and looking at new business ideas.

PCRange also has a voice over internet protocol (VoIP) product named SIP Talk and is currently considering a launch into the smart home products category, meaning Menon is kept busy with his finger in many different tech pies.

But the ideas man says it’s important for an entrepreneur not to get too caught up with pursuing every idea you think of.

“The best thing to do is focus on a few things and do them well,” he says.

Menon says the best advice he can give other entrepreneurs is not to think in terms of long-term goals, especially within the technology industry.

“IT is an ever-changing industry, you can only think a year or two ahead or you have to change your plan because IT changes so fast,” he says.

“As an entrepreneur, you have to have the ability to shift focus in a jiffy. If you are slow to move you will miss out.”

Menon says defining his work-life balance is something that has taken time to perfect since launching PCRange in 2000, but has been made easier by hiring the right people to allow him to take a step back from being hands on in every task.

“Initially, everything is your baby and it’s not easy letting go,” he says.

“Everyone has this problem when they have to let go at some stage, but you just have to train people the best way you can and hopefully they don’t make mistakes.”

“But I have just been so blessed with a wonderful team, now I go on business trips and I won’t even have to call the office – they’ve got it under control without me.”

But spending lots of time travelling for work, Menon says finding the right balance is still something he works at and is often helped by switching off when he can.

“When I’m not working I basically sit at home and vegetate,” he says, admitting his favourite guilty pleasure is devouring episode after episode of shows like Dig, Person of Interest and Game of Thrones.

Having just recently purchased a 12-acre property in Adelaide wine country, you’ll also find Menon working on home renovations, between checking his emails and reading up on tech trends.

“At the end of the day, an entrepreneur is always married to work, that’s the truth. So as much as I try, I still find I’m always balanced towards work,” he says.

The importance of being able to evolve and shift focus is at the heart of Menon’s plans for the future of PCRange as it expands into further product categories.

“Our networking business is still strong, but I don’t believe it is the future of the business,” he says.

Menon says the company is also planning to release a cloud solution in the near future and is thinking about other mobile products it can bring to market.

“There are only so many routers you can sell, you can’t keep doing same thing – you make a choice to shut up shop or move on and do things differently,” he says.