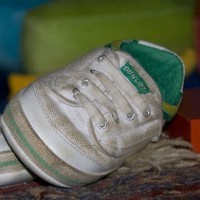 Retail group Pacific Brands has revealed the buyers of its Brand Collective division, which includes iconic shoe labels Volley and Grosby and licenses for sports brands such as Dunlop and Slazenger.

After confirming plans to sell off the brands to shareholders on Monday, the troubled retail group –owner of Manchester brand Sheridan and undergarment maker Bonds – said on Tuesday it would sell wholly-owned footwear brands Volley, Grosby and Julius Marlow to the private equity outfit behind Dick Smith’s turnaround, Anchorage Capital.

Anchorage will also pick up the licensed shoe and apparel brands Clarks, Hush Puppies, Mossimo and Superdry, along with a joint venture with Iconix Brand Group.

Sports brands Dunlop and Slazenger will find a new home at IBML, a division of UK-based sporting giant Sports Direct International, which already owns the brands outside of Australia and New Zealand.

Apparel powerhouse PAS Group, home to brands such as Metalicus and Review, will pick up sports assets, including Everlast equipment, which will be housed in its Designworks division. The PAS Group will license the Dunlop, Slazenger and Everlast brands from IBML.

Pacific Brands said in a statement it will receive $39 million on a cash and debt-free basis from the transactions, which it will use to further reduce net debt.

However, the carrying value of the sold assets is estimated to be approximately $66 million when the sales are completed next month, with Pacific Brands saying it expects to record a loss from the sales of approximately $30 million at the end of the financial year.

“The sale of the Brand Collective business is consistent with our strategy to simplify and focus Pacific Brands on maximising the potential of our marketing leading brands such as Bonds and Sheridan,” said Pacific Brands chief executive David Bortolussi in a statement.

“While this has been a complicated divestment to execute, the transactions are all unconditional and should be completed within two weeks with minimal disruption to customers and our core business.”

Bortolussi said the transactions all mark the end of Pacific Brands strategic review, which has been underway for the past five years and also included the sell-off of the group’s iconic workwear brands Hard Yakka, King Gee and Stubbies in August.

But while Bortolussi says the divestments “significantly improve the overall quality and growth prospects of the brand portfolio”, there is speculation the re-shaping of the retail group is aimed at making the company more attractive to takeover bids.

Retail expert and partner at accounting firm Lowe Lippmann, David Gordon, told SmartCompany he believes the latest asset sales are about injecting as much cash as possible into the business.

Gordon says this week’s events are another step in the direction of the entire company being sold.

“I think they will set out of the whole thing,” he says.