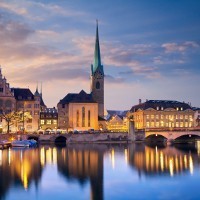 Amcor appears to be bound for Zurich, Switzerland, where the corporate tax rate is 17.92%

Paper and packaging giant Amcor has confirmed plans to relocate jobs from its Australian headquarters to Switzerland, while the company will continue to be listed on the ASX.

SmartCompany understands Amcor will relocate its headquarters from the inner-eastern Melbourne suburb of Hawthorn to Zurich in Switzerland.

An Amcor spokesperson confirmed to SmartCompany some positions will be relocated overseas, but said the company will continue to maintain an office in Melbourne.

“Amcor has a relatively small presence in Australia of approximately 50 people, some of those functions will be redeployed to where the operations are,” the spokesperson says.

According to the spokesperson, Australia accounts for only around 5% of Amcor’s business and it makes sense for the company to relocate some functions closer to customers.

The latest move by Amcor follows a string of rationalisations in the company’s office spaces over the past 20 years, aimed at reducing costs.

The first, announced in May 1998, saw the company slash 100 jobs as it relocated its corporate headquarters from its former location in Melbourne’s Southgate complex to a building in the inner-suburb of Abbottsford that had previously housed the company’s containers packaging group.

At the same time, the company combined the headquarters of its packaging and printing papers divisions into a single office in Camberwell, alongside administrative services centre at Richmond.

In October 2008, as part of a project called “One Australia”, the paper and packaging giant relocated 247 staff from five Melbourne office locations in Abbottsford, Camberwell, East Burwood, Alphington and Moorabbin into a new purpose-built headquarters in Hawthorn.

Amcor cut a further 300 jobs in February 2013, closing two factories and downsizing another, as it continued the consolidation of its Australian business premises.

While not commenting specifically on Amcor’s decision, Australian Chamber of Commerce and Industry chief executive Kate Carnell told SmartCompany this morning there are a number of factors that are pushing successful Australian companies to relocate offshore.

“Broadly speaking, there are two big challenges for global companies like Amcor – which I know has been growing strongly in the international market – having its corporate headquarters in Australia,” Carnell says.

“The first is the high corporate tax rate. We’ve been arguing with the government that we really need to cut it to 25% in order for Australia to be globally competitive.”

“The second issue is that our workforce is inflexible. That means that it’s expensive to employ staff in Australia. But it also means companies like Amcor don’t have the flexibility they need in their workforce to adapt to changing market conditions.”