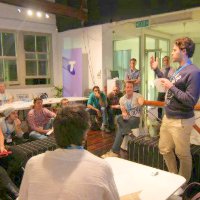 Pollenizer has officially launched a new online community, called the Pollenizer Guild, which is designed to help startup entrepreneurs connect with one another.

While the Guild officially launched this week, Pollenizer’s Sam Birmingham told StartupSmart the service will remain “in experiment mode for quite a while yet”.

“We have a collection of hypotheses to test. If we can learn more about what makes entrepreneurs tick; the problems that they need solved to increase the probability of their startup succeeding,” Birmingham says.

“[If we can] help them share a bunch of stories with their entrepreneurial peers then that would be a pretty good outcome.”

Birmingham says the online community is aimed at entrepreneurs at all stages of their startup journey, from “cubicle escape artists” to seasoned entrepreneurs with a startup that is scaling and everyone else in between.

“They don’t have to be a ‘big name’ mentor or investor – in fact, often I have found it better to connect and share war stories with other startup-pers who are bumbling their way along, just like me,” he says.

Birmingham believes there are other important benefits for entrepreneurs in sharing their failures and learnings.

“[Starting up] can still be a lonely journey, and we don’t always know what the final destination is and, sometimes more importantly, if we’re going to make it there,” Birmingham says.

“The more we can do to connect people and help them share those stories, the better, as far as I’m concerned.”