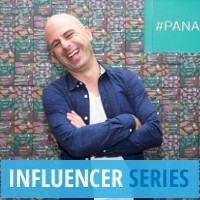 Pana Barbounis doesn’t beat around the bush when it comes to his ambitions for his raw chocolate brand, Pana Chocolate. The 41-year-old entrepreneur from Melbourne wants to turn the company he founded three years ago into the world’s number one raw chocolate company by 2017.

Barbounis is well on his way to achieving that goal. With a background in hospitality and catering, Barbounis’ organic raw chocolate products are sold by 3000 stockists around the world and he will open his second standalone store in Sydney next month before expanding to the UK and US. Pana Chocolate employs 65 staff and turns over more than $5 million each year.

I have always been passionate about food. When I was 18 I went into management with the former US owner of Sizzler. I learnt about great systems there and when I was 21 I went out on my own with a fellow manager and we started our own place. My career evolved from there.

I come from migrant parents who didn’t have a lot of money. My dad was a labourer. I knew if I was self-employed it would make me more money.

I did what I was taught to do in my 20s. But I was working in a way that wasn’t really me. I was patent programmed to think in a certain way. I wasn’t completely happy.

In my early 30s, I had to make some big decisions and reassess where I was. It was a spiritual journey. I decided in my next phase I would find what I wanted to do and do it my way.

I discovered raw chocolate and the rest is history.

I’ve always loved old artisan trades. Someone introduced me to raw chocolate and I read some articles to gain a better understanding. I thought this is interesting; I can do something with this.

It was hard to find raw chocolate 20 or 30 years ago. Cocoa has traditionally been roasted when making chocolate to kill off the bacteria. But the ingredients of raw chocolate are not cooked above 42°c. The process is now very advanced.

I developed my products and worked on them for six months. I did some training in the UK and visited Belgium where I worked with traditional chocolatiers. I learnt a lot about individual ingredients, although Pana Chocolate is in the raw food space.

I made, delivered and invoiced the first Pana Chocolate orders all myself. I went from selling $600 of chocolate one month by myself to bringing on a distributor and my first order was for 12,000 units. Now it’s 250,000 units.

Pana Chocolate has grown quickly but this business has been years in the making. I have been in food and catering for a long time.

I used to own catering businesses, supplying pre-made sandwiches to Melbourne Airport. And I was one of the first in Australia to display nutritional panels on food packaging.

The three years I spent in management with a big American company has helped me run my own business. I received a lot of training. It was very hands on and I learnt the value of always utilising your hands.

They were ahead of their game and I learnt about the importance of consistent systems.

I funded Pana Chocolate myself. With every other catering business I started, I would start with the equipment I could afford and then only purchase something new when I could afford it. I would wait to pay myself.

But with Pana Chocolate, I had money in an account and I paid myself a wage, even while I was researching the products. It was a recognition that this business wasn’t going to be purely about money.

Pana Chocolate is sold by 3000 stockists around the world. As of September 2014, we had 1900 stockists in Australia.

I’ve knocked back supply deals with the major supermarkets. For us, we want to be in the same spaces as all the organic and health food stores. They have been extremely loyal to me and become almost mini ambassadors for Pana Chocolate, pushing and promoting the brand.

It’s my way of giving my loyalty back to all the small stores.

I never want to feel like I have to bow to the majors. I can charge what I want for my products and I don’t have to put the squeeze on my suppliers, who I have a great relationship with and want to maintain.

If a big supermarket suddenly told you they didn’t want to stock your products anymore, that could mean 20 or 30 employees’ jobs in the eyes of your suppliers.

Using 100% Australian-made packaging is important to me. The ingredients in our chocolate come from all over the world so I want to use Australian packaging and Australian printers to do what we can to stay true to our country.

If you do the right thing, it pays dividends. It will come around.

We have an amazing relationship with our stockists around the world. Pana Chocolate is sold in 40 stores in Iceland alone, while France was our biggest international market last year. It helps that all the celebrities are flocking to vegan restaurants now.

We opened the first Pana Chocolate store in Melbourne in August 2013. We wanted a way to further display our organic, raw chocolate. I believe it was the first standalone raw, vegan dessert shop in the world that wasn’t attached to a café.

The Melbourne store has been a phenomenal success. It’s now a separate business entity in itself with its own operations team and seven employees.

Our second store will open in Sydney in March and we plan to open another store in the Melbourne CBD. We want four outlets by December. We’ve also developed fridges filled with Pana Chocolate for other retailers. It looks like a brass-version of the old-fashioned Coca-Cola fridges.

We’re selective about where we supply Pana Chocolate to. We’ll start with stores in Melbourne and Sydney and will have some in other states too.

Next month we will open an office in the UK. We’ll have a warehouse there and we’re in the process of securing employees. I hope to start producing chocolate there by the end of the year and eventually open a store in the UK too.

Despite my Greek background, it makes sense to expand to the UK first. We currently export to 19 countries, 90% of which are in Europe. We’re sending a lot of product to the UK and the language and systems are very similar.

We will expand to the US in 2016. I want Pana Chocolate to be the number one raw chocolate company in the world by 2017.

We will focus purely on chocolate; there is enough space for us to keep growing in the chocolate market.

The best marketing we can do is word-of-mouth through ambassadors who have embraced the products, but social media has been a great help. We have a reach of around 150,000 across Facebook and Instagram.

We’ve also received a lot of unpaid editorial coverage. All together we’ve been featured in 50-odd newspaper and magazine articles and we haven’t had to pay a thing.

Last year I created a marketing department and hired a PR company. We want to reach a wider audience and tap into the mainstream market.

I’ve just finished writing my first business plan. I’ve always had a vision and there are key people who I have shared some information with but it was a gratifying feeling to sit down with my team members in November and December and take all the ideas out of my head and put them on paper.

It was something I needed to do as more people join the company. I needed more structure and more parameters. The biggest transition I have made is being about to empower the people that work for me to make decisions.

If my business is keeping me up at night I get up and write down my anxieties. It clears my head and I feel as if I have actioned it.

Pana Chocolate is my passion; it’s the best journey I have been on. I jump out of bed to go to work each day. I can take the business so much further still and financially, it is very rewarding.

I’m blessed with an amazing team. There is not one employee that I wouldn’t re-hire today. My second, third and fourth employee are still with me and the only reason my first isn’t is because they moved overseas.

I remember one time when we were extremely busy. I got to work at 7.15am to get started. But two of my employees were already in before me. They knew about the workload and they just started working.