Say hello to the new $5 note: What small businesses need to know

Small businesses around the country will soon start to see a new-look $5 bank note come through their tills, with some 170 million new notes entering circulation from today.

The new notes have been designed to improve the security of the Australian currency, with new versions of the $10, $20, $50 and $100 notes to also follow in coming years.

As banks begin distributing the new notes to consumers and retailers, here’s four things businesses need to know about the new $5 note

1. The design has changed

The new note is the same size and colour as the existing one, which has been in circulation for close to 25 years, and still includes an image of the Queen.

However, the new notes have a distinctive clear strip through the middle of the note, which includes a number of icons such as a three-dimensional federation star and an Eastern Spinebill bird, which appears to move when the note is tilted.

Prickly Moses wattle is also depicted on either side of the clear strip.

The note also includes a “tactile” raised bump on each of the long edges of the note, which is designed to help people who are vision-impaired tell the difference between different bank notes. 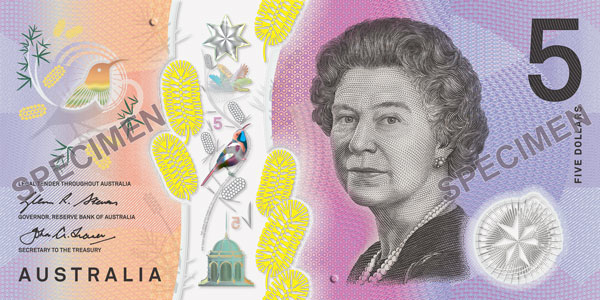 2. Security has been enhanced

The Reserve Bank says the bank note’s “world-first” clear strip, and the icons within the strip, are intended to improve the security of the bank notes by making it harder for fake notes to be produced.

RBA governor Glenn Stevens said in a statement this is the first time the features have been used on an Australian banknote.

“The new banknotes are the culmination of many years of research and trial and extensive consultation with subject-matter experts and the cash-handling industry, as well as qualitative research involving focus groups,” Stevens said.

The number of counterfeit banknotes detected by the RBA increased by 63% between the 2013-14 and 2014-15 financial years, which the central bank attributed to a “single production source” of fake notes in its most recent annual report.

James Holloway, deputy head of the RBA’s note issue department, told SmartCompany this morning the changes are designed to “keep the notes safe and secure” and to “remain well ahead of counterfeiting”.

“While counterfeiting isn’t a particular problem, it is rising, and we want to keep it low,” he says, adding that it is essential for any payment system to be upgraded periodically.

In the event that a business believes they have mistakenly accepted a counterfeit note, Holloway says the first step to take is to contact the police. Businesses should handle the counterfeit note as little as possible and make note of any descriptive information they can give to the police about the person who was using the fake note.

While businesses are not obliged to accept notes that they believe could be counterfeit, Holloway says it is important that business owners and operators do not put themselves in harm’s way.

Holloway says businesses can continue to accept and use the existing $5 note, which remains legal tender, but should familiarise themselves with the new note to make sure they know what it is when it is presented to them by a customer.

The old notes will be progressively withdrawn from circulation as the new notes begin to circulate through the economy.

The $5 banknote is the first of the Australian banknotes to receive an upgrade, with the larger denomination notes to also receive facelifts in coming years.

All of the new notes will have the same security features of the new $5 notes and will include a different species of Australian wattle and a native bird.

The colour, size and people featured on the notes won’t change.

More information about the new note is available from the RBA’s website and through the RBA Banknotes app.

In the early development of the new banknote, there was a list of 200 security features to choose from. One of the features not mentioned in the article includes the Omron rings/EURion constellation which can be seen on the left of the note next to Parliament House. They are used to prevent photocopying/scanning.

For those concerned about whether automatic machines like self-serve checkouts, coke machines etc will accept these new notes, the RBA has been engaging with cash-handling and cash machine operators throughout the entire process. This meant they had access to the notes months in advance of circulation for testing and re-calibrating.