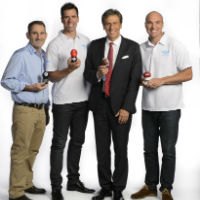 The potential to tap into the lucrative US sports licensing market is the reason why Talent2 founder and Shark Tank judge Andrew Banks agreed to part with his own money to invest in Bottlepops – sports themed bottle openers created by former Australian volleyball players Greg Jury and Stephen Brooks.

On last week’s episode of Channel Ten’s Shark Tank, Banks teamed up with fellow shark Steve Baxter to invest $150,000 in Bottlepops, which are already sold in a V8 car design through Repco stores in Australia.

Speaking to SmartCompany after last week’s episode was broadcast, Banks says due diligence on Bottlepops proved he was right to trust his instinct that Bottlepops can tap into the $16-17 billion sports merchandise market in the US.

There’s already been “significant” interest from US distributors and franchises and Banks believes Jury and Brooks’ goal to sell 280,000 units in the US will pale in comparison to the deals that will be signed.

“I’m pretty sure the licensing deals in the US will dwarf that,” says Banks, who says comparable bottle openers with sports logos are already selling in the US at $7.50. He says Bottlepops are “much more innovative” and can therefore be sold at a premium price.

Without naming names, Banks says a US sports brand that most Australians have heard of is interested in working with Bottlepops and there is potential for deals with a range of Australian sporting codes, not just football or rugby.

Banks’ comments come as the sharks prepare for their most emotional pitch yet, with Brisbane entrepreneurs Rebecca Glover and Leah James to ask Banks and Baxter and fellow sharks Naomi Simson, Janine Allis and John McGrath to invest in their childcare service for children with special needs on this Sunday’s episode.

Glover and James established their business Hummingbirds after traditional childcare services failed their own children. But the company, which offers day long care, early intervention and support to special needs children and their siblings, can only currently afford to offer four places.

The pair wants to roll out the business nationally and will ask the sharks to help them achieve their goal.

Banks, who founded Talent2 with Geoff Morgan in 2003 and sold the company to Allegis Group last year, says more needs to be done to encourage entrepreneurship in Australia, “otherwise we’re dead”.

“There’s no limits to the imagination of young entrepreneurs in this country,” he says.

Banks divides his time between Australia and the US and he encourages other entrepreneurs to follow in Jury and Brooks’ footsteps and consider how they can tap into the US market.

“The US is fabulous, it’s the biggest market in the world and you can raise a lot of money very quickly,” he says.

“There are a number of very capable intermediaries in the US, including one that is focused on helping Australian startups.”

But like with any new business, Banks says it is essential to undertake extensive research before attempting to expand to the US.

“You do what you do with any business idea, you research thoroughly on execution,” he says.

“Do your homework, visit customers. You have to visit and test your theories and 50% of the time, you’ll be right.”

Banks say Shark Tank viewers can expect to see him make more investments during the series, including in an innovative product that deals with foot health, which he describes as “a new twist on an old topic”.

Of the 24 offers made by the sharks during this season, Banks says 18 are accepted by the entrepreneurs. He puts the success of the deals made on the show down to the fact the sharks are opening their own wallets and their investments are not tied to the “modest” fees they receive to appear on the show.

“That’s where they went wrong with the Dragon’s Den,” says Banks, referring to the Channel Seven program, which aired in Australia in 2005.

“It’s not far off what happens in the real world.”