Shipbuilder collapses into administration after fire 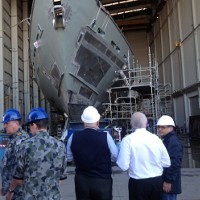 Brisbane-based shipbuilding company Aluminium Boats Australia has collapsed into voluntary administration following the loss of one if its navy vessels in a massive fire earlier in the year.

The company is the latest Australian manufacturing company to collapse, with FTI Consulting Group’s John Park and Kelly Trenfield appointed as administrators on Tuesday.

A statement provided to SmartCompany by FTI Consulting said the commercial and naval shipbuilder had now stood down its staff, given the uncertainty over the financial viability of the business.

The fire that destroyed the company’s HMAS Bundaberg in August was the catalyst for the company’s downfall, according to a statement from Aluminium Boats Australia director Roy Whitewood, who said the voluntary administration process would help the company address the financial challenges.

“It is my strong hope and desire to return the business to financial health, and I will be working closely with the administrators to try and achieve this,” said Whitewood.

“I would like to take this opportunity to thank our staff, who have shown enormous support to the company, particularly during the past 11 weeks as we have sought to work through a range of issues following the fire.”

Aluminium Boats Australia specialises in high performance commercial, luxury and defence vessels, according to its website. Its major contracts were with the Royal Australian Navy, the Queensland Police Service, Mooloolaba Coast Guard and Cruise Whitsunday, according to the Courier Mail.

The 15-year-old business had employed 160 staff before the fire in August, but let 90 staff go after the navy ship went up in flames. It axed the other 70 jobs on Tuesday, according to Fairfax.

FTI Consulting said it will conduct a review of the Aluminium Boats Australia business and will update creditors as a matter of priority. It is expected that FTI Consulting will be able to report to creditors within five weeks.

Professor Roy Green, dean of the faculty of business at the University of Technology, Sydney, told SmartCompany the collapse follows an Australian and worldwide trend towards more specialised manufacturing.

Green says while he could not comment on the specifics of Aluminium Boats Australia, a failure to diversify is often a concern for Australian manufacturers and may have been an issue at play.

“This company may have been in a very precarious position by continuing to foster such a dependency on the defence sector,” he says.

“In some sectors, there is more of a dependency on public procurement than the global market. But boatbuilding, especially at the knowledge infrastructure and design end, ought to be a competitive strength for us [Australia].”

Comparing the boatbuilding industry to the car component sector, Green says a recent study conducted by UTS showed there were three types of Australian companies.

The first, he says, are those with strategic plans in place to diversify. The second are those who recognise the need for change but do not yet have the capacity to diversify.

“The third group are in a state of denial and will not accept the tap has been turned off. When it happens, they will simply close their doors and their asset and employees will be scattered to the four winds.”

FTI Consulting was unable to make further comment in the early stages of the administration, but the first meeting of creditors will be held November 13 in Morningside, Queensland.