Releasing his final report into misconduct in the banking, superannuation and financial services industry yesterday, Hayne said he was “not persuaded” national consumer credit protections would benefit small business, citing the dangers of a credit squeeze.

“With some exceptions, I generally do not favour altering the rules that govern lending to small and medium enterprises,” he said.

Broadly, Hayne has backed the Australian Banking Association (ABA)’s new industry code of conduct while recommending ASIC be given stronger enforcement provisions to police the sector.

The ABA’s code, called the 2019 Banking Code of Practice, was signed off on by ASIC last year and will come into effect as the primary piece of regulation governing SME lending from July 1.

The minor changes which have been recommended are likely to minimise the risk of a lending crackdown by the banks, although risks for breaching the code will increase significantly.

Both the government and the opposition have committed to implementing all 76 of Hayne’s recommendations, of which only eight relate to SME lending, including four Agribusiness suggestions.

Hayne decided the manner in which banks evaluate loan applications, enforce and review loans, and consider guarantees under the new industry code should not be changed.

That’s left Australian small business and family enterprise ombudsman (ASBFEO) Kate Carnell, who has called for a “major overhaul” of the industry code, feeling the royal commission has not gone far enough.

“The disappointment is for all those small businesses that lobbied hard to get a royal commission, they will feel disappointed,” she tells SmartCompany.

“I’m disappointed that he fundamentally said the code is a source of justice, that it should be enforceable, but then did not take the next step … the problem is the code in its current form is not up to speed.”

“It’s now up to the banks to show they’ve changed.”

Carnell is now calling on the government to go a step further than the royal commission and strengthen the industry code before it comes into effect later this year.

“It’s absolutely essential for the government to tell the ABA they expect changes to be made,” she says.

Council of Small Businesses of Australia (COSBOA) chief executive Peter Strong graded the report as “10% change, 90% continue as you were”.

“The report is surprising in its lack of anything groundbreaking when it comes to recommendations, perhaps that reflects what COSBOA has said all along: the banking system in Australia was not broken,” he says.

“What the royal commission did highlight was the arrogance and elitism of the biggest institutions in the banking and superannuation systems which caused severe and unnecessary pain on a small but still significant number of innocent people.”

“There are many other recommendations that should have good outcomes for small-business owners when it comes to the banking code and enforceable code provisions, and we also acknowledge the government’s swift response and support of the recommendations,”  Strong says.

“We, of course, need to continue to study the detail for any unintended consequences including the continued difficulty for small businesses to access finance due to the reaction, perhaps overreaction, of bank management.”

The ball now rests in the court of the ABA and ASIC, who will be responsible for amending and approving aspects of the 2019 banking code.

“Don’t judge banks by their words, judge them by their actions in the coming weeks, the coming months, as they implement this report,” she said during a press conference.

The government has urged the ABA to accept Hayne’s recommendations in relation to the banking code, and it has, including around enforceability.

“We have always regarded the code as enforceable and if it’s enshrined — if those appropriate parts are enshrined in law — that will put beyond any doubt the rights of customers and their entitlements,” Bligh said. 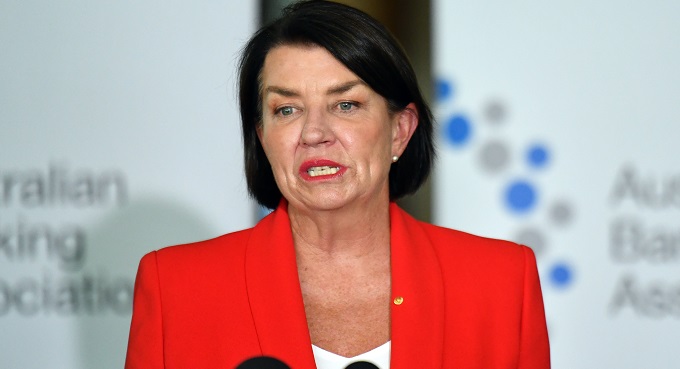 The government will also be lobbied to take a stronger view on SME lending, which in the context of the upcoming federal election will also place increased pressure on the opposition.

SmartCompany asked Small Business Minister Michaelia Cash and Shadow Small Business Spokesperson Chris Bowen for comment on their willingness to pressure the ABA to change the code but did not receive a response before deadline.

The government has also set up a last resort compensation scheme, which will offer bank customers and small businesses an avenue for compensation if they’ve been a victim of bank misconduct.

Teeth for the banking code

While Hayne took a relatively soft view on changes to the regulatory framework behind SME lending, he took a much stronger approach to enforcement of the 2019 banking code.

Keeping with the broader theme of his report, Hayne recommended ASIC should be able to include “enforceable code provisions” in the 2019 banking code.

Contravening those provisions would constitute a breach of the law, Hayne said.

Further, Hayne recommended ASIC and the ABA should make provisions in the 2019 banking code which govern contracts between banks, SMEs and guarantors “enforceable code provisions”.

This essentially adds teeth to the code, sidestepping its existing enforcement framework, which is currently handled by a Banking Code Compliance Committee appointed by the ABA and the Australian Financial Complaints Authority (AFCA).

ASIC came under significant scrutiny over the course of the royal commission and was criticised for being too accommodating to banks in its traditional approach to regulating the sector, preferring negotiation over court action.

The organisation has been undertaking reform, but Carnell says the corporate regulator has a lot to prove before small businesses can trust it will be an effective cop on the beat.

“They’ve got a lot to prove, they haven’t shown they can be a successful cop on the beat from a small-business perspective until now,” she says.

ASIC was put on notice by Hayne, who said the regulator must be watched closely in the coming years to ensure it is being effective.

Sarel Gronum, lecturer and Bachelor of Business Management program leader at the University of Queensland Business School believes ASIC will shape up following the report.

“Any rule is only as good as its application and I think Hayne has addressed these concerns,” he tells SmartCompany.

“The government also has an obligation to ensure these mechanisms are doing what they’re supposed to be doing.”

Encouraged by the new leadership at ASIC and the likely scrutiny that will be on it to implement other areas of the royal commission report, Carnel says it’s incumbent upon ASIC and the Australian Prudential Regulation Authority (APRA) to provide certainty on small-business serviceability.

Serviceability has emerged as an issue, partly because some clauses in the 2019 banking code are vague, creating uncertainty on the side of banks and SME clients as to how banks should carry out their responsibility to be prudent and responsible lenders.

That uncertainty makes many areas of the code harder to enforce, Carnell notes.

There will also be an increased role for AFCA in helping SMEs with banking issues. The recently launched watchdog will be given new powers under several recommendations made by Hayne.

Notably, Hayne has advised amending the Corporations Act to compel financial service license holders to hand over documents and records relating to disputes on request.

Hayne acknowledged the enforcement of loan terms and decisions made by banks regarding loan renewals and renegotiations have been a source of tension with SME clients.

He said a provision in the 2019 banking code which obliges banks, in general terms, to give three months notice of their intention not to renew a loan to an SME client who isn’t in default, will address some hardship.

But, despite concerns raised by Carnell that the current code gives banks too much wiggle room in the event of a default, Hayne said he doesn’t favour “imposing any obligation on a lender to renew a loan or to renew it on particular terms”.

“There is, in my view, no sound basis for seeking to interfere in what must be the free choice of both parties to decide whether to make an agreement and, if so, on what lawful terms that agreement will be made,” he said.

Under the new code banks don’t have to provide any notice to SME clients of their intention not to renew a loan in the event of default if they believe they’re avoiding a “material increase in credit risk”.

Further, banks are given the discretion to use their “reasonable opinion” of a circumstance in their dealings with small-business loan defaults.

No changes to loan evaluation

Hayne has stopped short of recommending changes to the way banks evaluate loan applications, despite calls for more transparency in the process.

He had asked the banks to expand on the way they evaluate credit applications from SMEs and how they assess whether potential clients can repay loans in his interim report.

In their responses, both ANZ Bank and Commonwealth Bank argued for the preservation of lender flexibility when considering SME loan applications.

Hayne said, having reviewed those submissions, that it would not be useful to “prescribe any particular approach to be applied by all banks” in the way they evaluate loan applications.

Hayne was not persuaded that changes to the way loan guarantees are regulated in the 2019 banking code are necessary.

Citing existing case law regarding the enforceability of loan guarantees, Hayne said existing protections would be augmented by additional protections in the 2019 banking code.

The royal commission revealed some horror stories regarding the way banks have treated loan guarantors, including cases where people have been threatened with losing their houses.

“The evidence received by the Commission has not persuaded me that any steps need to be taken beyond those developments,” he said.

One of the few changes to the current regulatory framework Hayne did recommend was amending the definition of small business in the new Banking Code of Practice.

Under the current code, there is a three-part test for determining a small-business client: annual turnover of less than $10 million, fewer than 100 full-time equivalent employees, and less than $3 million in total debt to all credit providers.

Hayne, agreeing with a previous review of the code, said this should be simplified to those businesses which employ less than 100 full-time equivalent employees and where a loan is for less than $5 million.

Hayne said this would extend the coverage of banking code provisions to another 10,000 to 20,000 firms.

This was a change that was recommended by small-business advocates including ASBFEO and opposed by the banks.

What do you think about Hanye’s report? Let us know: [email protected]