Springing forth: How Sleeping Duck founder Winston Wijeyeratne is getting a jump on the mattress industry 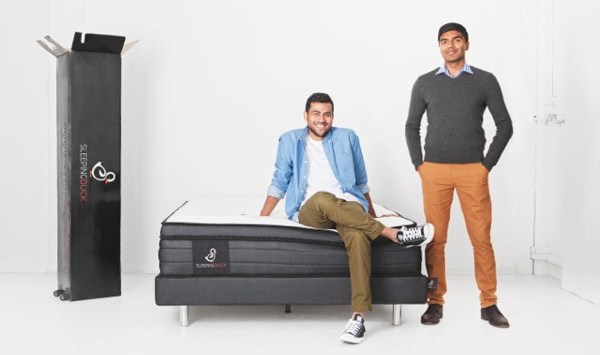 Winston Wijeyeratne says he and business partner Selvam Sinnappan were exploring a range of startup ideas when they hit upon an industry they believed was in need of a wake-up call – the lucrative business of sleep.

“When we’d personally gone shopping for mattresses, we looked at the industry and felt it had gone backwards,” says Wijeyeratne.

“Things hadn’t seemed to change with the way mattresses were sold in the last 100 years.”

Poor service and exorbitant prices: for the budding entrepreneurs, the stagnated industry was just waiting for disruption.

“I’ve seen mattresses cost up to $12,000. Why would that be the case? And when I asked them [the salespeople] why there was such a difference in price, they couldn’t tell me. The salesman is just trying to sell you the one that gets them the highest commission,” he says.

“But we did a bit a research on how much it actually costs to make a mattress and saw there was a huge opportunity,” says.

They were right – since launching online mattress retailer Sleeping Duck at the start of 2014, the duo turned over more than a million dollars in their first 10 months alone.

With just one mattress product sold online and an industry changing “try before you buy” policy that lets customers sleep on the mattress for two months and then return the product for a full refund if they aren’t happy, Wijeyeratne says Sleeping Duck is revolutionising the way people shop for their mattress.

“People have responded really well, either because their previous experiences [buying mattresses] have been terrible or they are just sick of going to different stores to try beds for 15 mins. After all, you spend ten years of your life on a mattress – it’s an investment,” he says.

The 27-year-old entrepreneur sits down with SmartCompany to chat about why every day in a startup is different, how he plans to expand the business’ team, and why being an entrepreneur means never being satisfied.

Wijeyeratne admits he’s more of a night owl than a morning person.

Despite the small sleep in, Wijeyeratne is back at it as soon as he’s awake – answering emails from the comfort of his home, on a Sleeping Duck mattress of course.

Luckily, Sinnappan is the early riser of the pair, and the two are able to balance the workday between them.

“He’s more operations based and I’m more strategic based, but we both share the product development,” says Wijeyeratne.

Friends from ANZ Bank’s graduate program, the two engineering grads bonded over the belief that ultimately, traditional corporate life was not for them.

“We had a similar feeling it wasn’t quite right for us working in a large organisation. It was hard to matter and hard to get things done,” he says.

“I expected it to be different, for there to be more ownership over your work. So going into business made sense. I could get to control my day.”

Like many startup founders, Wijeyeratne says he believes daily life is about “wearing many hats”.

Given its rapid growth over the last 12 months, Sleeping Duck is now looking to hire a customer service team and Wijeyeratne hopes this will allow him to focus more time on strategy.

Although he says expanding the team will also bring with it new challenges for the business.

“Managing a team itself will be the difficult part. We have been so focussed on product and service. How do we get a team to replicate what we do and the service level we bring? It will be an interesting process for us,” he says.

“We need a bit more experience finding the right people for the job. It has been difficult to find talent, to find people that are as strongly committed to this as us,” he adds.

Wijeyeratne says as the business grows, he hopes to create a flexible workplace culture and maintain the relaxed and casual atmosphere a startup enjoys.

When asked how he balances work and life commitments in this early stage of the business, Wijeyeratne admits he hasn’t put a lot of thought into creating the healthiest equilibrium.

“I try not to think about it, this is just my life now. Although my girlfriend can get a bit annoyed,” he laughs.

“I’m still young so I don’t have a family or anything like that yet, but as those things come along I’ll reconsider my priorities.”

When he isn’t thinking about mattresses, Wijeyeratne says he likes to get to the gym, go for a bike ride or cook with his girlfriend, or you’ll likely find him binge watching a TV show like Homeland.

Having passed their million-dollar milestone, Sleeping Duck is now focusing on hiring the right people and building the brand name.

“For us it’s really now about becoming a mainstream brand and working out how do we become a real competitor against the big bricks-and-mortar stores,” he says.

And Wijeyeratne says reaching the $1 million landmark is no reason to slow down or take too much stock of their progress so far.

“We haven’t had the time to stop and think about what we’ve done,” he says.

“I think the entrepreneur mindset is, ‘well that was good, but what else should we have done?’ At the start I thought if I made a million dollars that would be the best thing in the world, but now we have, I’m like ‘well that’s good, but what next?’”