Suits and Thai in Oz: Thailand food conglomerate to open 500 restaurants in Australia 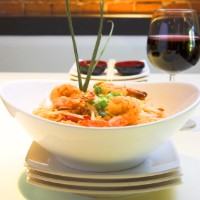 Thailand food giant Charoen Pokphand Foods is set to continue its Aussie expansion by opening 500 Thai restaurants across the country.

Despite recent unrest in Thailand, the Thai food conglomerate has gone from strength to strength in recent years and is nowThailand’s largest agriculture business and fifth-largest company by revenue ($13.2 billion), according to Fairfax.

The company, which is also the world’s largest manufacturer of animal feed and the second-largest producer of swine, currently owns just two Melbourne noodle bars.

But CP Foods is looking to further diversify its holdings as it gets set to ramp up its fast-food revenue from 3% to 10% within the next decade, according to Fairfax.

“We’re one of the few food companies that have full integration,” Ohmpornnuwat told Fairfax on Monday. “We have the opportunity now to go from (animal) feed all the way through to the restaurant.”

CP Food’s regional general manager Richard Lovell told The Australian the group wanted to expand 1000 WAT to up to 500 outlets nationwide, including rolling out a franchise model in two years.

“The best-practice model for restaurants and franchises globally is in Australia,’’ he said.

“Over the next four years our target is 300 to 500 stores with a modern Thai, fast food, great value-for-money offering.’’

John Hart, chief executive officer of the Restaurant and Catering Industry Association, told SmartCompany there has been a significant increase in the number of multi-store operations opening up across Australia, rather than single-store operations.

“The fundamental mechanics behind this is you need to have multiple outlets to have it stack up financially,” says Hart.

Hart says the economy of scale CP Foods is bringing to the venture, combined with their ability to reduce production and shipping costs through its vertical integration model, will give them a good chance of succeeding down under.

Hart says international operations traditionally haven’t had a great deal of success in Australia, largely because of economic factors such as high wage costs.

Hart says the quick-service type concept that CP Foods is looking at has typically been more successful in Australia and given CP are likely very efficient in reducing the cost of production, it may be able to overcome the issues of upscaling from two outlets to large operation.

But Hart says they may run into difficulties with Australia’s skill shortage and the difficulty of bringing staff in from offshore.

“There are a number of challenges they will face in scaling up. The industry welcomes those coming with that challenge and is there to support them.”

CP Foods Australia was unable to be reached by SmartCompany before the time of publication.