The 10 best-performing super funds of 2016 revealed, but it’s not all smooth sailing for retirement planning

Confusion and uncertainty have been the name of the game in superannuation, and while the nation’s top funds have returned more than 10% last year, experts remain concerned about global volatility and the federal government’s changes to the sector.

SuperRatings released its annual list of the nation’s top 10 best-performing funds in 2016 this week, with Catholic Super’s balanced option and HOSTPLUS’s balanced fund topping the chart with an annual return of 10.1%.

Investments in infrastructure and property were found to work well for both funds, with SuperRatings noting that HOSTPLUS boosted its member’s returns by avoiding investment in bonds.

There’s a long list of domestic and international events that hit Australians’ super savings in 2016, from the Coalition’s hard fought superannuation changes to Brexit and uncertainty in global politics, but SuperRatings says the system remains strong in the face of these concerns.

“There will be no shortage of political events in 2017, and based on last years’ experience we can expect continued bouts of heightened volatility. However, like 2016, we may be surprised at the resilience of super funds and their ability to perform in a range of market conditions,” SuperRatings chairman Jeff Bresnahan said in a statement.

Here is SuperRatings’ full list of the 10 best-performing funds in 2016: 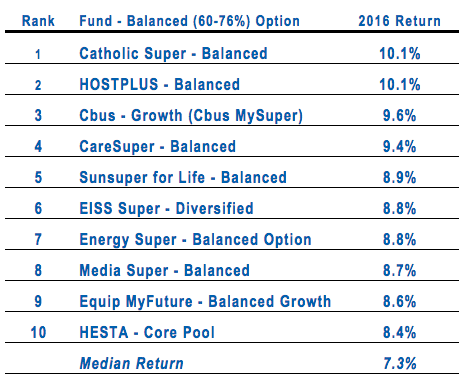 Read more: Self-managed super fund assets are now worth $611 billion, but do you have enough to start one?

Not everyone is optimistic about the current state of the country’s retirement planning landscape, with policy changes to both pensions and superannuation caps kicking in this year.

The first pension payments calculated using the government’s new asset test limits were made this week, with increases to the asset test-free area and increase to taper rates. Industry Super Australia raised concerns that the changes would immediately reduce the pension payments of 325,000 Australians.

In an opinion piece for Fairfax this morning, professor of public policy at the Australian National University Andrew Podger suggests the broader scope of Australia’s retirement policies is being limited with short term political fixes. Instead, he argues, the focus should be on how much an individual will need to have saved for life after retirement.

“It is time we stopped focusing on people’s accumulated savings and started focusing on the income streams these can generate over people’s retirement years,” he says.

Meanwhile, super savers have another six months to plan before new limits on tax-free account balances and contribution caps kick in on July 1, 2017.

These changes include the $1.6 million cap on tax-free accumulation fund balances, along with changes to annual contribution caps and new roll-over provisions for unused contributions.

I’m currently getting 15%. I’m just with MLC and have it in various share and property funds. These returns sounds terrible.

15% is terrific Rohan. I think its even way above the better performing retail funds. ?Where is that fund shown in here and its ranking etc ?
http://investmentcentre.moneymanagement.com.au/factsheets/ri-l3fn6/mlc-mk-allocated-pension-investors-mutual-australian-share