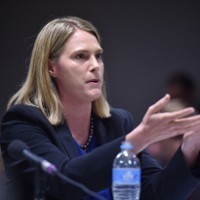 The world’s biggest tech giants have fronted up to the Senate inquiry on corporate tax avoidance in Sydney yesterday, denying allegations of tax dodging and snubbing questions on how much of their billion dollar revenue goes offshore.

But Google, Apple and Microsoft did confirm the Australian Tax Office is auditing their tax arrangements for alleged tax avoidance.

The inquiry heard Apple generated $6 billion in revenue in Australia last year and booked a profit of $250 million, but paid only $80 million in tax.

But when King was asked by Xenophon about what percentage of that $6 billion in revenue went overseas, he was unable to answer, responding that he has to take the question on notice to answer at another time, according to Mumbrella.

“I find it extraordinary that you can’t answer that,” said Xenophon before the inquiry.

Carnegie revealed all of Google’s Australian advertising revenue gets booked in Singapore, where the official corporate tax rate is 17%.

But she refused to specify the exact turnover figures for Google’s Australian operations, arguing she would be in breach of US disclosure laws if she revealed the numbers.

As well as Singapore, the tech titans were also accused by senators of channelling their revenue through Ireland and Bermuda, with Xenophon asking both King and Carnegie if they had ever travelled to those countries before, which they conceded they had not.

Peter Strong, executive director of the Council of Small Business of Australia, told SmartCompany he was impressed by the way Xenophon and other senators were tackling the international issue of tax avoidance.

“I think a lot of small businesses have thought too many politicians haven’t taken it seriously,” Strong says.

“The government have done such good work on the Competition Review, the unfair contract review and the tax paper, so let’s match all that with a serious approach to tax avoidance.”

Strong says he hopes politicians are not swayed by the influence of big businesses that donate money to political parties for good favour.

Strong says the small business community is not calling for tech companies to pay “more than what they owe”.

“If you are decent member of Australian society and good corporate citizen, you pay your tax,” he says.

“We don’t mind if you’re making sure you’re not paying too much, but if you make your profits here, you should pay here.”