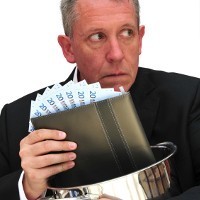 The Australian Tax Office is calling for consumers and business owners to dob in businesses suspected of dodging their tax bills, launching a social media campaign featuring a video of a “cooking-the-books” café owner choosing to “dodge tax”.

At the same time, the ATO is also stepping up its own measures to uncover small businesses that skip out on tax and superannuation obligations and therefore take advantage of business owners that do the right thing.

The ATO unveiled the “Be honest … is this fair” video on Facebook last week as part of its work to “protect honest businesses”.

The 30-second clip shows a wrecking ball hitting a café, with one of the café’s employees gesturing to another nearby café and saying “she’s ripping us off again”.

The clip then shows the other café, called “Cooking-the-books café”, where a woman is processing a transaction and has the option to choose either “fair transaction” or “dodge tax”. She chooses the “dodge tax” button.

In follow-up comments on the Facebook post, the ATO said it has been undertaking a national campaign focused on “higher risk industries”, including the café, restaurant, catering and takeaway sector, hair and beauty businesses and those in the building and construction area.

“This campaign involves visiting businesses to provide education and assistance and conducting audits and reviews when we discover activities like tax evasion and hiding income.”

The ATO has also confirmed to SmartCompany it is taking “more timely action” on small businesses that deliberately set out to avoid their obligations, with ATO commissioner Cheryl-Lea Field saying it is working to find a “balance” between helping small businesses that are genuinely struggling and addressing the “small minority” of businesses doing the wrong thing by either not reporting income, not paying employee entitlements or not paying tax debts.

But Field says the increased activity is “not a crackdown”, as reported by the Daily Telegraph.

“We have been out talking to the broader business community and business associations and the focus has been on helping,” Field told SmartCompany.

This includes the ATO making applications to wind-up businesses, which Field says are on the rise. According to the Daily Telegraph, applications from the ATO have increased from around 50 per month to 100 per month.

But an application from the ATO to wind-up a business does not necessarily force the company to close. Instead, Field says it is a mechanism for the ATO to inform a business the next step will be asking the courts to determine if the business is solvent or not.

“It makes some businesses realise it is serious and they need to talk to us,” says Field.

“Some put their heads in the sand.”

Field says the past 12 months has seen the ATO roll out several new services to make it easier for small business taxpayers to meet their obligations, including a range of videos, self-help phone services and an online business viability tool, and the ATO is “looking at more and more digital and contemporary tools” to help small businesses.

“Even well-run businesses sometimes have short-term difficulties,” she says.