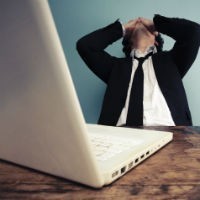 The Australian Taxation Office has tried to reassure businesses and taxpayers wanting to file their tax using its online services that problems with the system over the past week have almost been resolved.

The ATO revealed last Wednesday it was experiencing intermittent problems with its myTax and eTax online services.

Yesterday the Tax Office released a statement with an update on the system from ATO Second Commissioner Geoff Leeper, who said he was “disappointed” some people were still experiencing “some slowness”.

“Our priority is to ensure the community has a positive experience using our online services this tax time,” it read.

“We’re sorry for any inconvenience that issues with our online systems have caused. I can assure you that we’re working around the clock to fix these.

“Our online experience for people is better today than yesterday. Further enhancements and improvements to our systems are continuing.”

The statement said as of midday yesterday about 90% of those trying to lodge were “successfully accessing online services and lodging their returns”.

Some taxpayers remain unconvinced, however, with one taking to Twitter yesterday afternoon to suggest issues were ongoing, telling the ATO, “Sorry this is now the fourth day I have tried with no luck.”

@ato_gov_au Sorry this is now the 4th day I have tried with no luck – 90% CANT access , sure i got abit further but still unexpected errors

According to the ATO statement, lodgements were also on par with last year’s figures, with nearly 300,000 tax returns being received, including about 120,000 combined myTax and eTax lodgements as at July 7.

It also says it has issued more than $289 million in refunds since the start of the new financial year.

“If it’s not urgent for you to lodge now, we suggest that you wait until August when there will be more pre-fill data available to enhance your experience, making it easier and quicker.”

“We’re experiencing the same delays and slow systems, so it’s taking us a little bit longer to do everything we want to do as well,” he says.

He says while the delays were “frustrating”, he believed the ATO’s online services had improved “massively” over the past few years, and teething issues were expected.

He says tax agents had other lodgement options and the online systems were the only ones that were down.

“Small businesses need to consider there is no immediate deadline, you might be organised in getting it done now but there’s no need to lodge right away.”

Executive director of taxation consulting at Pitcher Partners, Leon Mok, told SmartCompany the ATO’s assurances were a positive development and contained lessons for anyone making IT changes on a public-facing system.

“There will be more systems that will go online and it’s a good lesson to learn from in terms of having the system be up and running in an efficient manner before it goes live to the public,” he says.

SmartCompany contacted the ATO for additional comment but did not receive a response prior to publication.