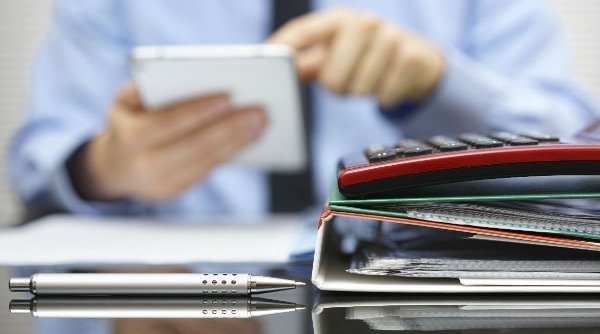 Over 110,000 tax returns have been corrected by the Australian Taxation Office (ATO) prior to tax refunds being issued thanks to new data-matching software at the tax office providing more scrutiny than ever before.

The ATO recovered over $53 million in tax thanks to the correction of 112,000 errors in taxpayers’ tax returns, and while the tax office notes the mistakes are only small, assistant commissioner Kath Anderson says “unfortunately” many are still getting it wrong.

In a statement, Anderson criticised those who put a higher priority on generating a significant tax refund instead of filling out their returns correctly.

“Most of the income adjustments we are making at the moment are for simple mistakes, like leaving out bank interest or salary and wages. But for some, it seems their priority was on generating a refund rather than getting it right, as they have deliberately ignored the pre-fill information that was available at the time of lodgement,” Anderson said.

“We are happy to see that so many taxpayers are confident to lodge early. However, we are seeing some people continue to make simple mistakes or try to game the system to secure a refund.”

“Our message to taxpayers is simple: take care this tax time and use the data we have provided.”

The tax office also issued a warning to those who believe they can “bend the rules” when it comes to their tax return, saying the ATO’s advanced data-matching and analytics software will likely pick it up and penalties could be imposed.

The tax office has already processed nearly 5.8 million tax returns this financial year, and paid returns of almost $11.9 billion, an increase of $270 million compared to the same time last year.

As expected, younger workers keen for their tax return windfall were the quickest to file their returns, with 17% of returns submitted in July and August being filed by 18 to 24-year-olds.

However, when it comes to receiving a significant tax return, one Australian occupation far outshines every other, with analysis of over 13 million Australians by online tax service Etax finding Australian surgeons have the highest average tax deduction claim of $21,184.

This is followed by real estate agents with an average claim of $8,616, and lawyers with an average claim of $6,861. In a statement, senior tax agent at Etax Liz Russell says the top claiming professions on the list all have something in common: the ability to claim a higher number of work-related expenses compared to other professions, such as special training courses or textbooks.

However, she warns workers away from trying to “get creative” with their deductions, even if they work in a fairly broad field.

“Those with broader options for deductions who try to get ‘creative’ with claims are on the fast track to an ATO examination. These can go back years and are very painful for workers who don’t keep good records,” she said.

“However, a bit of help from a tax agent to ensure that you claim all the deductions and tax concessions that you’re entitled to will definitely pay off.”

The full list of the highest claiming Australian professions is below: 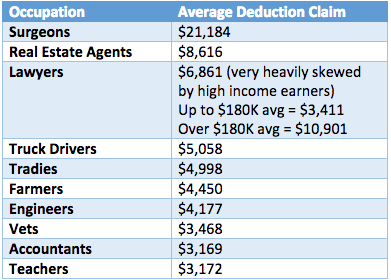 NOW READ: ATO to crack down on over 1 million taxpayers after finding $8.7 billion tax gap