Budget 2015: Joe Hockey makes the case for a “Netflix tax” on digital goods and services 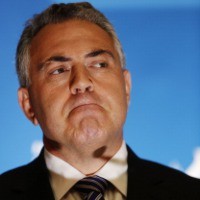 Global technology companies that sell digital music, movies, books and other forms of media to Australian consumers may soon be subject to the good and services tax, with Treasurer Joe Hockey leading a push that he says could generate “billions” of extra tax revenue for the government.

While Prime Minister Tony Abbott has set the tone for a “dull and routine” budget next month, the inclusion of the so-called “Netflix tax” could put some much-needed cash back into the government’s coffers.

Speaking after a meeting with state treasurers, who support the move, Hockey said extending the GST to “intangibles” such as media downloads at their overseas source would be straightforward to administer, reports Fairfax.

“I see those things as integrity measures for the tax base, not the broadening of the GST or an increase of the GST,” Hockey said.

“The states agreed in principle that we should move in that regard. I have offered to work as quickly as possible with them to introduce legislation to address that in relation to intangibles.”

Hockey has also secured agreement from his state counterparts to change the $1000 GST-free threshold for online purchases from overseas retailers, which is a bugbear for many SMEs in the retail sector.

But the states and territories were not able to reach consensus on any changes to how the revenue from the GST is divided, following a push by Western Australia to be granted a bigger slice of the revenue pie.

The move to extend the GST to media downloads would likely capture products and services sold in Australia by global tech giants such as Google, along with streaming service Netflix, which launched locally in March.

Prior to the local launch, a spokesperson for Netflix told SmartCompany the company would not be collecting GST as “there are no local or federal rules requiring companies not based in Australia to collect GST on digital purchases”.

But speaking to SmartCompany this morning, a Netflix spokesperson said the company would comply with any law change.

“Netflix has been and will be compliant with all applicable laws and regulations, and pay taxes as required under local and national law,” the spokesperson says.

SmartCompany contacted Google Australia but did not receive a response prior to publication.

Zimmerman also welcomed any move to lower the GST-free threshold on overseas purchases.

“We know around 20 companies bring in about 80% of all overseas purchased goods,” he said.

“State governments are losing billions of dollars in GST revenue which could support teachers, police and doctors. Australian retailers are also not being given a level playing field, and this is costing many local jobs.”

Craig Whatman, indirect tax partner at Pitcher Partners, told SmartCompany while it is difficult to know exactly how much tax could be levied by extending the GST to cover intangible purchases, he says it is “one significant hole in the GST collection base”.

Whatman says which companies are subject to GST is currently governed by a provision in the GST legislation called the “connected to Australia” provision and so Hockey’s proposal would mean amending that legislation.

“Unless a vendor is connected to Australia, they don’t have to pay GST,” Whatman says.

Whatman says this is different to broadening the base of the GST to cover categories such as fresh food and health services, it is still extending the base of the tax “in the sense that at the moment, those purchase are not within the net”.

And while Whatman says the big players like Netflix and Google will clearly be affected by the move, “there are a multitude of non-resident vendors which are much smaller” and for them, the change will likely increase their cost of compliance, especially if Australia adopts the European model under which international companies would have to register for GST and lodge returns.