Myth busting claims about the cost of company tax cuts

In the drawn-out debate on the value of a company tax cut to our economy, there have been a number of claims: that the plan would cost $50 billion; that the cuts are just a handout to foreign investors; that there will be little benefit for many years; and that there are cheaper ways to stimulate investment.

Many of these claims are misleading or overblown. But the government still needs to make the case that the company tax cut is prudent after a decade of deficits.

The oft-quoted $50 billion cost of the company tax cut refers to the 10-year budgetary cost of implementing the plan incrementally, and reflects the expected much higher nominal gross domestic product (GDP) a decade from now.

But the annual costs, while substantial, are much lower than $50 billion. If the tax rate were cut from 30% to 25% today, Commonwealth revenues would fall by about $7.4 billion a year, or about 2%.

Over time, as companies accumulate capital, so too would company tax, personal income tax, and goods and services tax revenue increase. So the “steady state” budget cost of the company tax cut in an economy the size of Australia’s today would be about $5 billion. 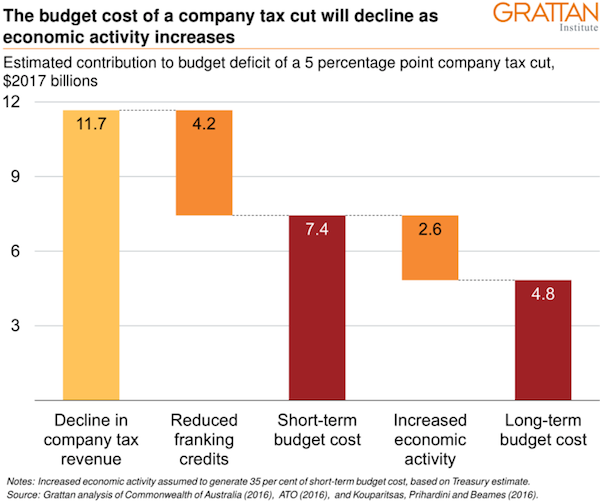 Claim: Company tax cuts are a handout to foreign investors

But Australian shareholders would also benefit, at least initially. We calculate that Australian companies could lift after-tax dividends to Australian investors by about 3% (worth about $3.5 billion a year) without reducing investment. Those who own shares in listed companies would also receive a capital gain, as foreigners bid up share prices, to reflect their higher value post-tax dividends.

In the longer run, Australian listed and foreign companies can be expected to invest more, build up the capital stock, and so drive up wages (and returns to other fixed factors, such as land).

Still, there may be losers. Some domestically-funded firms might lose. And if policymakers were to permit migration to grow strongly in response to a stronger demand for labour, wages would not rise much, and stronger population growth would push up rents and land values.

Claim: There are no benefits for many years

Some argue that any benefits will take many years to appear.

It is true that the full benefits of a company tax cut would take many years to accumulate and that there are short-term costs. Cutting the company tax rate to 25% this year would reduce national income by about $4 billion immediately. Treasury estimates a fully-funded company tax cut would add 0.6% to national income in the long run, the equivalent of $10 billion in 2017, as the economy grows on account of increased investment. Is it worth the wait?

Investment would probably pick up quickly, and about half of the economy’s adjustment would take place within a decade. It would take about six years after the tax cut for national income to be higher than it would have been.

If the tax cut were assessed like a business investment, we calculate it would have a payback period of just over 10 years; its rate of return would be over 15% — not bad for a government that can borrow at 3%. 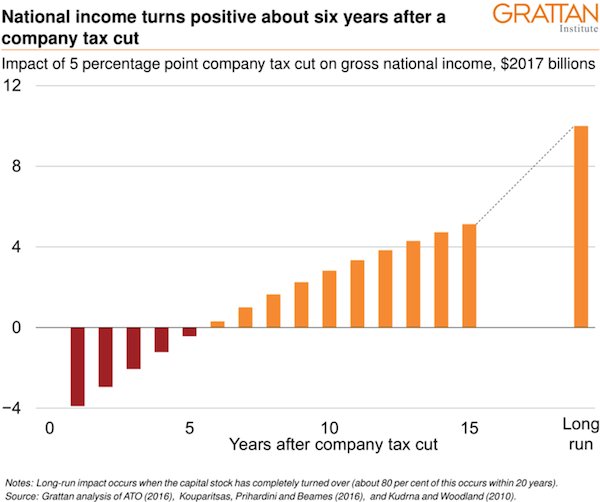 Claim: There are cheaper ways to stimulate investment

Some argue that it would be cheaper to provide a tax cut on new investment, without applying it to existing capital, as a company tax cut does. Two alternatives are often proposed.

First, accelerated depreciation, recently supported by ANZ Chairman David Gonski, allows firms to immediately write off a proportion of all new asset purchases, and therefore claim a large tax deduction upfront. Such a scheme already exists for some highly durable assets (to limit the distorting effects of the company tax) and for small businesses.

We calculate that permitting firms to instantly write off about 22% of their asset purchases would provide investment incentives equal to those offered by a five percentage point company tax cut. In the long run, such a scheme would cost the budget less than cutting the company tax rate. But the cost to the budget would be higher in the early years.

The scheme could be about 25% cheaper than a company tax cut. But it may have other disadvantages. Firms may seek to relabel operating expenses as capital expenses in order to qualify for an investment allowance, making it more costly for government to administer.

The scheme would also benefit firms investing in assets with short lives, like computers, rather than assets with long lives, like buildings, that are already discouraged by the company tax. For these reasons, it is difficult to recommend investment allowances as a long-term alternative to a company tax cut, though they could play a role as temporary incentives.

Overall, there are genuine uncertainties about the costs and benefits of a company tax cut, but many of the objections that have dominated public discussion seem overblown. The main problem for the Government is that, in an era of persistent budget deficits, it has failed to show why it’s fiscally prudent to offer an unfunded tax cut.