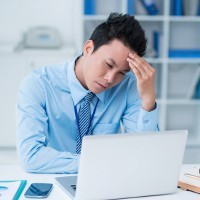 Issues with the Australian Taxation Office’s online services continue to plague taxpayers and small business owners two months after the ATO’s website crashed because too many people were attempting to lodge their tax return online.

The ATO’s website was down again over the weekend without warning, leaving taxpayers to vent their frustration on social media.

Those who attempted to log onto the ATO website were met by a page that said the ATO’s online services were “currently unavailable”.

“We are working to restore the service as soon as possible,” the page said.

“We apologise for the inconvenience. Please try again later.”

Angry taxpayers took to the ATO’s Facebook page to express their displeasure.

“Yet another weekend with no access to ato.gov.au or the Tax Agent Portal,” one person wrote.

“Lucky it’s just the busiest time of the year for tax agents. Thanks yet again ATO for your incompetence.”

A spokesperson for the ATO told SmartCompany the tax office undertook scheduled maintenance over the weekend.

“Our online services for individuals was unavailable between Saturday 11.30pm and 4am Sunday,” the spokesperson says.

Mark Chapman, director of tax communications at H&R Block, told SmartCompany that simplyleaving people with an error message and asking them to try again the next day is not appropriate.

Chapman says not taking active steps to forewarn taxpayers about a website outage on a weekend harms small business owners and people working full-time who often have to leave their administrative tasks until then.

“I’m sure we all appreciate that occasionally maintenance has to be done,” Chapman says.

“But for many self-lodgers, taking away access to the site at the weekend can be a particular irritant because working people can often only find the time to work on their tax return at the weekend. With the deadline for lodgement now only six weeks or so away, the ATO needs to be aware that weekends can be a period of peak activity for many taxpayers who either want to lodge or to research what they are or aren’t entitled to claim.”

While the ATO is responding to the vast majority of people complaining about the website outage on Facebook and Twitter, Chapman says the tax office could have done more.

“At the very least, the ATO should provide a clear warning on its homepage several days before the event, that there will be disruption to the website between certain dates and times,” he says.

“That way, people can at least plan to work around the outages.”