Would tax cuts for new businesses be more likely to boost “jobs and growth”? 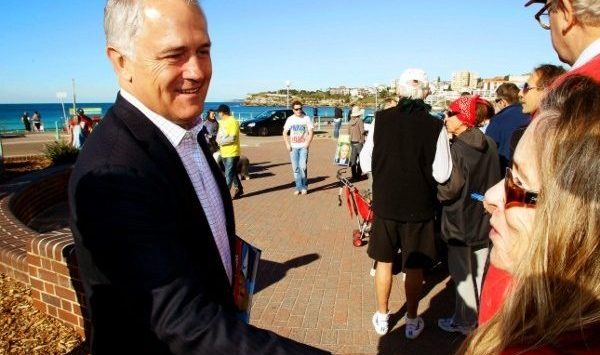 By Saul Eslake, University of Tasmania

The Turnbull government’s signature economic policy at last year’s election was a 5% cut in the company tax rate, over a 10-year period, at a cost to revenue estimated to be in excess of $48 billion. As the government itself has conceded, this now stands very little prospect of being passed by the Senate.

However, there is one element of the government’s proposal which appears to enjoy almost universal political support—the idea that “small” companies should get a tax cut. The only disagreement among the Coalition, Labor and the Greens on this score is how small a company should be in order to be deserving of paying a lower rate of tax.

From the standpoint of good economic policy this is surprising. There has been a lively debate for a while among economists as to whether cutting company tax rates will boost economic growth, employment and real wages, and the extent to which this theory is supported by evidence. But there is no evidence at all to support the notion that preferentially taxing small businesses will do anything to boost “jobs and growth”.

According to the latest available data from the Australian Bureau of Statistics, small businesses (defined as those with fewer than 20 employees) employed just under 45% of the private sector workforce in June 2015. Despite this, small businesses accounted for only 5.2% of the increase in private sector employment over the five years to June 2015.

By contrast, large businesses (defined as those with 200 or more employees) employed less than 32% of the private sector workforce in June 2015, but they accounted for more than 66% of the increase in private sector employment over the five years to June 2015.

Employment and employment growth by size of business 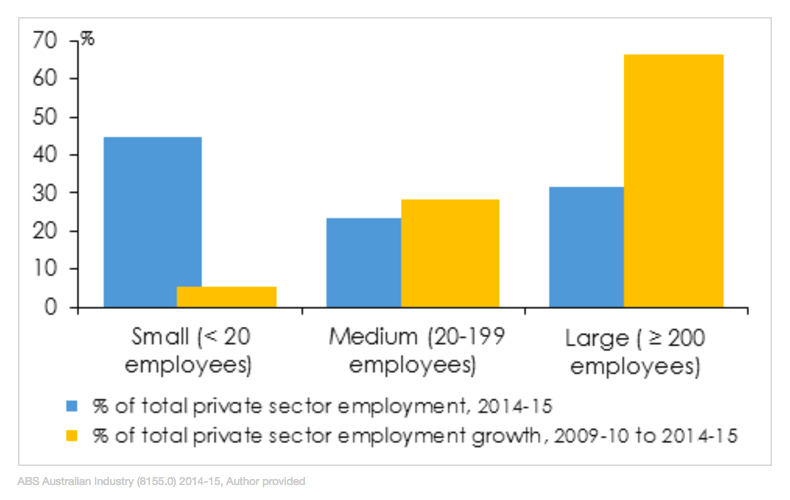 Similarly, a smaller proportion of these small businesses engage in any of the four categories of innovation which the ABS recognises in its annual survey of business innovation than of medium or large businesses. 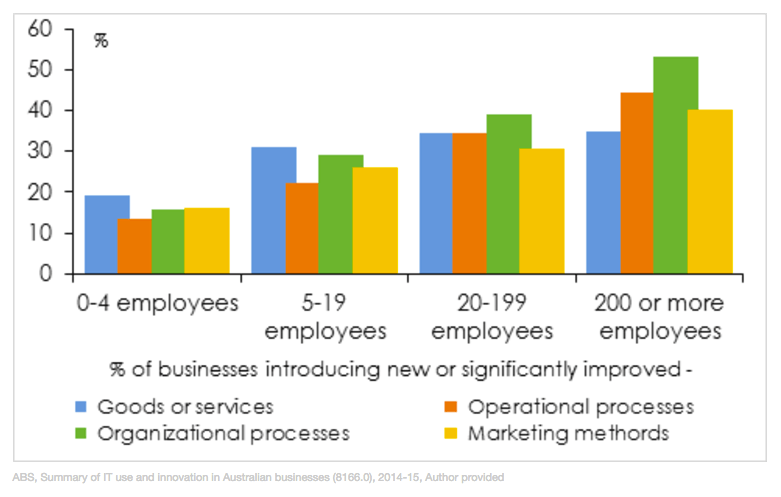 So on the basis of the available evidence, a policy which sought to encourage employment creation and innovation via the use of preferential tax treatment would surely preference large businesses, rather than small ones.

However, that would be politically challenging, given that a large majority of voters think that big companies should pay more tax, not less.

What sort of businesses create jobs and growth when tax is reduced?

An alternative approach, which would be much more likely to have positive effects on employment, investment and innovation, would be to tax new companies at a lower rate.

OECD research shows that young businesses are the primary drivers of job creation. And new companies are more likely to be at the frontier of productivity growth.

New businesses are of course likely to be small, at least initially. Confining preferential tax breaks to new businesses—for example, by prescribing that a lower tax rate is only available to a business for the first (say) three years after its incorporation—focuses the assistance on those businesses which are actually likely to innovate, and to create jobs. This is instead of dissipating it on the much larger number of businesses who have no desire, intention or ability to do either.

Preferentially taxing new businesses is therefore much more likely to achieve the stated goals of boosting jobs and growth, and of encouraging innovation, at much lower cost.

In addition to this, preferentially taxing new businesses avoids the perverse incentives that inevitably arise when the eligibility for some form of preferential treatment is determined by a business’ size. This is frequently demonstrated by the reluctance of businesses to put on an extra worker when doing so would render them liable to pay state payroll tax.

Of course, there would need to be compliance measures designed to forestall “rebirthing” of companies in order to prolong access to tax preferences intended to benefit new companies, but that would not be difficult to provide.

The Coalition’s support for a preferential tax rate for small businesses appears to owe more to its long-standing, almost religious, belief that there is something inherently more noble or worthy about owning and operating a small business, than there is about managing or working for a large one (or a government agency). Also that this belief should be reflected in the tax system, rather than basing it on any evidence that taxing small businesses at a lower rate than large ones will have any positive impact on economic or employment growth.

Why Labor and the Greens should support this view is much more of a mystery.

Saul Eslake is a vice-chancellor’s fellow at the University of Tasmania.