It’s tax time again: Here’s what has changed for tax deductions thanks to COVID-19

Almost as much as a Bunnings snag, Aussies absolutely love a tax deduction. And fair enough. The Australian Taxation Office hands out $132 billion in tax returns each year, and we want our fair share. At this time of year, tax deductions are front of mind. There are just a couple of weeks left in the financial year to incur expenses that could get you a good deduction.

Tax returns happen when the ATO has collected more tax than it had a right to under the law. For example, you don’t have to pay tax on any income you give to charity. So, at the end of the financial year you advise the ATO of your charitable donations and they reimburse you the tax they took from that part of your income. Same for work expenses.

Work expenses are a major category of deductions. As the next chart shows, we claim almost $8 billion in deductions on our cars alone, far more than the almost $4 billion we claim for charitable donations. The average car claim is $2286. Claims for work clothing and education are also material. 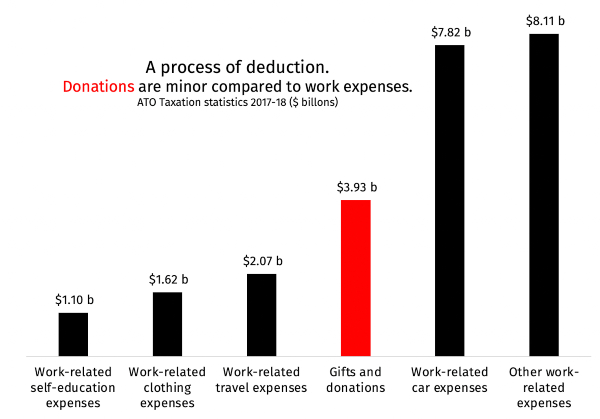 Work claims are not spread evenly. Men made $27 billion in tax deductions in 2017-18, compared to $15 billion made by women. One of the most startling areas of difference is in car-related claims. All those utes driven by tradies count as a work cost and generate a deduction. The fact tradies are mostly men is skewing car-related deductions sharply to men. Meanwhile, among health workers, women claim more in uniform costs than men, because uniformed professions such as nursing are female-dominated.

From the ATO’s perspective, however, claims related to uniforms are not the biggest part of the picture.

As the next chart shows, if you add together all the black bars in the chart above, they don’t reach anywhere near the scale of deductions related to rental properties. All that negative gearing has to happen somehow! 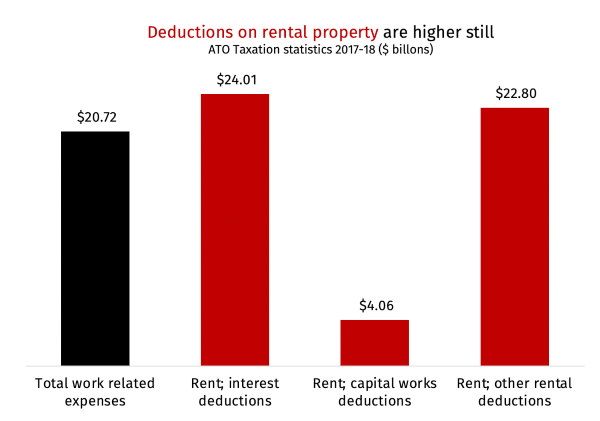 The dodgy deduction has existed as long as tax itself. But the government can collect more tax if it reduces fraud in tax deductions and has been using artificial intelligence to try to crush dodgy deductions. These days, instead of just doing audits afterwards, the ATO’s systems pop up messages on the screen when people are doing their taxes in the online myTax system.

“’Nearest neighbour’ methods are used to compare amounts being entered into myTax, with those of other people in similar circumstances. If a claim is significantly different to what we expect, a message appears on the taxpayer’s screen, prompting them to check their figures,” the ATO says. These pop-up messages encourage people to reduce their claims, by $113 million in 2017-18. Not bad, ATO.

This tax time, the algorithms will be looking out for different things. The ATO knows the last year has not been normal, and it is warning people not just to copy and paste their expenses from previous years.

“We know many people started working from home during COVID-19, so a jump in these claims is expected,” said Assistant Commissioner Tim Loh.

“But, if you are working at home, we would not expect to see claims for travelling between worksites, laundering uniforms, or business trips.”

The ATO has set up a special deduction available for people who worked from home during the pandemic, which began on March 1, 2020. Instead of adding up all your electricity bills and dividing them by the share of floorspace which is your home office, then figuring out what share of your internet bill is for work, you can just claim $0.80 for every hour you worked at home.

They call this the “shortcut” method. And if there’s one thing Aussies love as much as a snag or a tax deduction, it’s a shortcut.

The data — leaked by an anonymous source — is American, but this kind of thing happens in Australia too, UNSW associate professor Ann Kayis-Kumar explained.

Plus exclusiveA business owner’s guide to maximising your superannuation

Don't play super catch up: make the most of the tax and salary benefits for business owners with this resource guide.