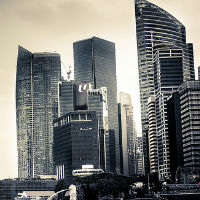 Tax avoidance, or the use of legal arrangements to reduce tax, is rife. According to the Australian Tax Office (ATO), Australian companies in 2012 sent almost A$60 billion to related parties in tax havens. Singapore and Ireland topped the list of countries where businesses send their money.

A recent report by the Tax Justice Network and United Voice shows “the effective tax rate of ASX 200 companies over the last decade is 23%, below the statutory rate of 30%”.

The report says that of the top 200 ASX companies, nearly one third have an average effective tax rate of 10% or less.

This low effective tax rate is achieved due to tax avoidance. For example, according to the Tax Justice Network, 57% of the top 200 ASX-listed companies have subsidiaries in tax havens.

However, low effective corporate tax rates are also achieved because of the legitimate use by business of loopholes within our tax laws. Business tax concessions result in the government forgoing around A$20 billion in revenue.

Labor had planned to repeal tax laws allowing businesses to deduct interest against non-taxable income in some circumstances. These provisions contravene basic tax principles and form a key part of some tax avoidance arrangements. However, Treasurer Joe Hockey dumped the proposed change while the Business Council of Australia applauded the move.

It is on Hockey’s watch too that former KPMG tax partner and current Commissioner of Taxation Chris Jordan has cut the number of ATO staff by about 12% or 3000 people. There are plans to cut staff numbers by another 2000 people over the next few years.

This will eventually save the government up to $400 million a year. However, on my conservative estimates of a one-to-five ratio between ATO expenditure and revenue collected at the margins, these staff cuts will reduce revenue collection by A$2 billion.

Perhaps to counter the impression the ATO isn’t doing that much about tax avoidance, it recently announced that some individuals with a net worth of more than A$30 million will receive letters this month asking for details about their tax structures. However, these letters are not the same as audits. Rather they are a simple request for further information and can be ignored.

These letters are just another step by the ATO to collect more offshore tax from the wealthy. First there was Project Wickenby, then the tax amnesty of Project Do It, which is set to finish in December. Now there is also the new tax treaty and information exchanges with Switzerland. Yet even if all these projects do result in more tax being collected, it hardly spells the end of tax havens.

Oxfam estimates that at least A$21 trillion is hidden in tax havens globally. To date the current ATO amnesty has brought in just A$1 billion in assets, and about A$180 million in income.

A G20 priority this year is to take a global coordinated approach to tax avoidance. The OECD has also set out its Action Plan on base erosion and profit shifting.

Challenges to a global crackdown on tax havens

Yet there are pressures within the United States and United Kingdom from big business against any change. Countries like Singapore and Ireland, which have benefited from favourable international tax arrangements in a digital world, are also likely to resist change.

Digital companies challenge the old ways of thinking about tax and sovereignty and attempts to address this to date have shown little real progress. As the internationalisation of Australia’s economy and globalisation of production continues, the opportunity for cross-border use of differing tax rules will increase.

International cooperation and exchange of information will not fix this. The relations between states are anarchic and the business drive to avoid tax is systemic.

For example, Google chairman Eric Schmidt defended his company’s tax avoidance activities around the globe. “We are proudly capitalistic. I’m not confused about this,” he said.

These activities have resulted in Google funnelling almost US$10 billion into Bermuda, saving US$2 billion in taxes. Schmidt says the company will not turn down big tax savings.

This is the key to tax avoidance. Competition forces business to seek legal and sometimes not-so-legal ways to reduce tax. If one company is doing it, all of its competitors will be forced to cut their costs too and one way is through tax avoidance.

Company tax avoidance is not a failing of capitalism: it is one of its logical expressions. It is up to citizens to push governments to really tax big business.

John Passant’s wife works for the ATO. He has not discussed these issues with her.