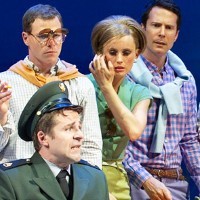 Less than budgeted ticket sales meant the musical had to close early and creditors have been left owing $2.4 million.

Christopher Darin, partner at Worrells, was appointed as an administrator last year.

He told SmartCompany of the money owing, $2.1 million is owed to Dirty Rotten Scoundrel’s director and producer of the show, George Youakim.

Darin says the 31-year-old and his family “poured a substantial amount” into the unsuccessful production.

“The company was a sole purpose company, established for the sole purpose of producing this theatre production at the Theatre Royal in Sydney,” Darin says.

“The director appears to have done significant research into putting together a budget for ticket sales and it just didn’t pay off,” he says.

“We’ve had other administrations where people budget on the back of an envelope but this doesn’t appear to be one of these cases.”

Youakim has proposed the company enter into a Deed of Company arrangement, which will mean priority creditors will get a return of around 49c in the dollar.

“If creditors resolve to approve the deed of company arrangement, the company gets handed back to the director,” Darin says.

“But he hasn’t indicated he will commence the operation of the company again.”

A second creditors meeting will be held on November 4.