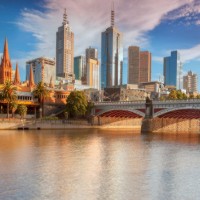 About $9.8 billion of homes have been sold at auction in the first six months of 2014, according to the Real Estate Institute of Victoria.

“This is 41% higher than this time last year,” Enzo Raimondo, the REIV chief told Property Observer.

“It also surpasses the previous peak of $8.9 billion transacted over the same period in 2010,” he added.

It was helped as Melbourne’s outer suburbs, traditionally the home of private sales, have been having higher than typical auction listings.

The lowest number of auctions over the decade was 8,820 in January to June 2009.

“This enthusiasm for selling at auction extends well beyond the traditional auction heartland of Melbourne’s inner suburbs,” Mr Raimondo said.

The suburb with the most auctions was the large, middle northern suburb of Reservoir, with 284 auctions.

Second was Richmond with 241 – the reverse of the first six months of last year, when Richmond topped the list and Reservoir was second.

Some outer suburbs such as Wheelers Hill had close to 60% more auctions than in the same period last year.

“Craigieburn was the outer suburb with the most auctions – 107 – yet it did not even make it into the top 10 last year,” Mr Raimondo said.

Mr Raimondo said that Melbourne’s solid property market this year had, in part, driven the increase in auctions.

“Stronger interest from buyers can lift the number of homes going to auction,” he said.

The REIV reported a July 5 weekend clearance rate of 74% compared to 73% last weekend and 68% this weekend last year.

There were 347 auctions reported to the REIV today, with 256 selling and 91 being passed in, 49 of those on a vendor bid.

Houses outperformed units today, at 77% against 70%.