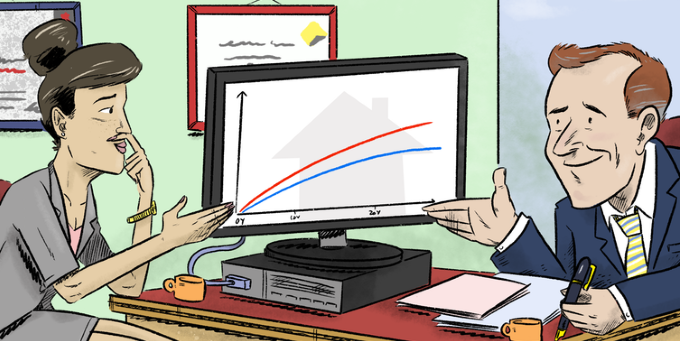 By Kevin Davis, University of Melbourne

The royal commission recommendation that mortgage broker commissions, currently paid by lenders, should be replaced by up-front fees paid by borrowers, has been controversial, to say the least.

Royal commissioner Kenneth Hayne wanted to eliminate first the “trail”, or annual ongoing commission paid by lenders to brokers, and then the larger upfront commission.

Brokers would instead be paid by the borrowers who use them, in the same way they pay for conveyancers, removalists, and other service providers.

At first, Treasurer Josh Frydenberg agreed, saying that from July 1, 2020, he would outlaw trail commissions on new loans and after three years would ask the Council of Financial Regulators and the Competition and Consumer Commission to review the impact of the changes and the implications of eliminating upfront commissions.

Then, five weeks later, he reversed, saying: “Following consultation with the mortgage broking industry and smaller lenders, the Coalition government has decided to not prohibit trail commissions on new loans, but rather review their operation in three years’ time.”

Brokers, wanting to keep things as they are, scored a victory. But maybe not for long.

Labor is still promising to abolish trail commissions, and to at least limit the size of upfront commissions.

The caution — on both sides of politics — is understandable. Changing the way people get paid is disruptive, and might cost them business if what they are charging is made apparent up front.

But it has sound economic underpinnings.

They can be seen by considering a hypothetical conversation between a prospective mortgage borrower, Sam, and the (economics-trained) mortgage broker (MB) she has approached.

Sam and the honest broker

MB: You know we don’t charge you any fees?

Sam: Great, but how do you earn a living? Who pays for your time and effort?

MB: The lender that we place your loan with pays us a commission.

Sam: So that’s presumably out of the interest I will pay on the loan? So I’m paying you indirectly?

Sam: So couldn’t I just go directly to the bank and ask for a lower interest rate, by cutting out the middleman (you)?

MB: You could try, but I save the bank some of the costs of attracting and dealing with potential borrowers. Ultimately, it’s probably cheaper for the bank to pay me than to do all that itself. So they probably wouldn’t offer you a lower interest rate for a direct approach.

Sam: What would happen if, instead, I had to pay you an upfront fee, rather than you getting a commission from the bank, as the royal commission proposes?

MB: It’s complicated. Would I charge fees to all clients who use my services, or only to those who ultimately get a loan through me?

Sam: Currently only clients who get loans through you pay, right?

MB: That’s right, so to keep it simple let’s assume fees would only be charged to successful loan applicants. Let’s also make some more simplifying assumptions.

MB: Assume the desired loan is $500,000 for five years, with annual interest-only payments, and principal repayment due at the end. The bank charges an interest rate to cover its cost of funds (including its profit and risk margin) and the operating expense associated with the loan.

Sam: Let me guess, part of the operating expense is either the commission payments made to you, or the costs the bank would bear instead if it did your work itself?

MB: Correct. Suppose my commission on such a loan is 0.1%, which is $500 per year or $2,500 all up. That just covers my costs. If the lender were to deal with you directly, it might incur an extra (say) $2,500 of costs, which it would need to incorporate into the interest rate charged to you.

Sam: So if I were to pay you a fee as the royal commission has recommended, I could pay you $2,500 upfront and you could negotiate with the lender to charge me a lower interest rate (0.1% in your example) because I have gone through you instead of approaching them directly?

Sam: But that’s $2,500! It’d be worth it because I would save that much money, and better for me because you would be putting my interest first, instead of that of the lender and your own commission. But I would need to find that much upfront on top of the deposit for the house.

MB: That’d be easily dealt with. You would take out a loan for $502,500, of which $2,500 would go to pay my fee, so you would need to pay nothing extra upfront. And the lower interest rate means you’d get it back. Your total interest payments would be the same as if you’d borrowed $500,000 as before.

Sam: Okay, so why exactly would it be better for me?

MB: First, I would be clearly working for you rather than for the bank (particularly given Hayne’s other recommendations to prevent banks giving me soft commissions such as furniture, payments for shelf space, bonuses for volume, overseas trips, and so on). You could decide whether to employ me based on whether I delivered value or not. Second, if my fees weren’t related to loan size (and broker competition would likely lead to that outcome), I would have no incentive to push you into borrowing more than you needed.

Sam: Okay, but what about the problem of less scrupulous brokers falsifying application data to get customer loans approved?

MB: I don’t think that would change, because the broker’s income would still depend primarily on the number of loans written. That’s where the other recommendations about clients’ best interest obligations and increased scrutiny of bank risks from outsourcing of duties to brokers would come in.

NOW READ: “I have kids”: Mortgage brokers could lose 75% of income as royal commission reality sets in

Coronavirus, Tax
Matthew Elmas
The ATO is encouraging businesses that may have made a mistake on their JobKeeper applications to come forward or risk an audit.

Startup News, Technology
Stephanie Palmer-Derrien
Daily News
Made For You