As such, they looked to female investors in order to achieve their latest, massive $2.6 million capital raise — finding investors willing to invest in a startup for the first time. Their new investors include Carol Schwartz, as well as other prominent businesswomen, human rights lawyers and activists.

Their successful raise goes against current trends in the startup and investor community, where male-founded startups typically dominate the ranks of those attracting venture capitalist funding in Australia. Less than one in three startups receiving VC funding are either founded or co-founded by women, according to the 2019 The Women & Entrepreneurship report.

And this latest round also highlights the interest in impact investing, especially from (but not only) female investors.

Co-founded by Christina Hobbs, Alex Andrews and Zoe Lamont to create a dedicated super fund for women, Verve now has more than 5000 members and manages close to $180 million in funds.

Verve said they were determined to raise money from those who shared their passion for women’s economic equality, as well as for impact investing in female-led companies.

That meant avoiding the VCs who were looking for nothing but the “next billion-dollar business”, as Hobbs explains on this latest round. They struggled to find interest in their purpose as a mission-led business, including how they wanted to use superannuation to explore opportunities for closing the gender wealth gap.

“It was often impossible to find a common language,” Hobbs said. 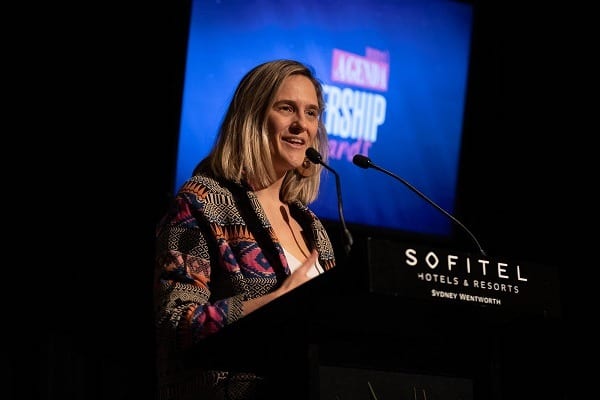 So what did they do? They looked elsewhere. Particularly to the businesswomen and impact investors who may have never thought about investing in startups previously, but that they knew would support the mission and goals of Verve.

“The conversation with these investors was totally different— they were drilling us on our impact, what we wanted our legacy to be and they were much more exciting conversations for us,” Hobbs said.

Investor Carol Schwartz said that as a longstanding supporter of female founder-led businesses, she was impressed by Verve’s ethos of “founded by women, led by women, and tailored for women”.

“Christina and her team have developed a highly commercial business that is tackling the economic inequity so many women face — both at the individual and systemic levels. I am excited to join this journey as an investor and as an advocate for more female leaders in Australia,” said Schwartz.

Some of the other female investors now involved in Verve include Deanne Weir, chair of the recently IPO-ed AI Media, as well as Human Rights lawyer Dalit Kaplan; the founder of Media Auditing business Without Fear or Favour, Pam O’Connor; and sisters Jess and Stef Dadon, the founders of vegan shoe company TWOOBS.

This latest round also attracted male impact investors, including Simon Griffiths and Ned Griffith, who lead the ethical toilet paper company, Who Gives A Crap.

So what happens next? Verve plans to use this latest raise to further grow the super fund, as well as its financial coaching and education business.

And Christina Hobbs says this push from female investors doesn’t end with Verve.

“It’s a really exciting time to be a female founder, we spoke to a range of investors who told us that they actually prefer to invest in female founders, and we hope through our capital raise that many of our investors will go on to invest in other female-led start-ups as well,” she said.

This latest raise also comes as Verve Super recently announced that it will become the first fund to direct its investments towards companies that perform well on gender equality measures, with the launch of the Verve Gender Equality Investment Index.

“Our members know all too well that money equals power, and they don’t want their own super savings invested in companies that are failing women,” Hobbs said, launching the Index back in June.

Aussie design unicorn Canva has closed yet another mammoth raise, bagging $273 million in a deal valuing the business at $54.6 billion.

Who Gives a Crap has raised $41.5 million, as Simon Griffiths strives to build a business making — and giving away — billions.