Sochi’s millionaires: The competitors with gold at the 2014 Winter Olympics 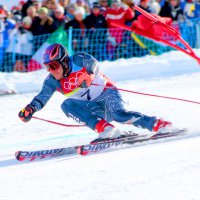 While many Australians are recovering today from a weekend of sweltering hot temperatures and bush fires, others are braving the cold peaks of Russia to compete in the 2014 Winter Olympics.

Olympians are better known for their athletic prowess than their wealth, however many achieve riches through lucrative sponsorship deals and other business ventures.

Winning a couple of gold medals doesn’t hurt either — a decree on the Russian government website says the top Russian athletes at the Sochi games will receive US $122,000 bonuses for winning gold, US $76,000 for silver and US $46,000 for bronze.

The amount paid to athletes for winning a medal varies between the countries. Australians typically earn around $20,000 for an Olympic gold, but Singaporeans have a much greater monetary incentive to train harder, with US $800,000 on offer for gold medallists (the country has never won gold at an Olympics).

Here’s a look at five of the highest earning athletes:

Popular United States Winter Olympian Shaun White is said to be the richest athlete at the games, with a net wealth of between $20-40 million prior to the 2010 Vancouver Olympics.

White is often thought of as the face of snowboarding and he continues to earn millions in endorsements.

In 2009 White signed a 10-year multi-million deal with Burton snowboards and in the same year Red Bull built the snowboarder his own US $500,000 half-pipe in remote Silverton, where he must travel by helicopter to reach it.

White is the favourite to win the men’s half-pipe at these games, which would be his third straight in the event.

Australian multi-millionaire entrepreneur and moguls champion Dale Begg-Smith is one of Australia’s most successful winter Olympians.

Known for not talking to journalists about his business pursuits, Begg-Smith has started many software businesses with his brother and is currently rumoured to run a malware business. His net worth is unknown, but it’s been estimated around $40 million.

At the 2010 Olympics he won a silver medal, after being hampered by a knee injury sustained in 2009. Begg-Smith has won 18 World Cups and been on the podium 29 times.

A controversial character, Begg-Smith is originally from Canada where he grew up and trained as a teenager. At age 16 he moved to Australia with his brother after quitting the Canadian ski program when he was told he was spending too much time on his business interests.

After the 2006 Olympics journalists asked other athletes how their cars compared to Begg-Smith’s Lamborghini.

Figure skater Kim Yu-Na is on a quest to win her second Olympic gold this year and is one of the most highly recognised athletes in South Korea.

The skater brings home hundreds of thousands of dollars in prize money, having broken 11 world records since 2007 and won numerous titles.

Her net worth is estimated at around US $14 million, earning most of her money through endorsements and her own sports management business All That Sports.

Last year she was ranked sixth on the annual Forbes list of highest-paid female athletes.

One of the older Olympians, 36-year-old American alpine ski racer Bode Miller and has both Olympic and World Championship medals to his name.

Having earned a lucrative sponsorship deal with Nike, he has a net wealth of approximately US $8 million.

He is said to have a net wealth of around US $2 million.

NOW READ: Australian Olympians who went on to start their own businesses